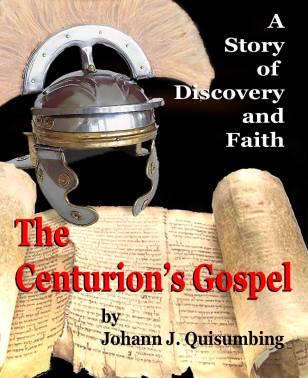 By the time they came to hearing distance, Jesus sat on an outcrop that was slightly higher so that his disciples and the surrounding crowd could see him better. He motioned for the people to sit. Again, just like at the lake shore, Cornelius was amazed with Jesus’ commanding presence. Except for the wind and the rustling of the grass, it seemed like there was hardly anyone on the hills. Then he spoke.

“Blessed are the poor in spirit, for theirs is the kingdom of heaven.

“Blessed are those who mourn, for they shall be comforted.

“Blessed are the gentle, for they shall inherit the earth.

“Blessed are those who hunger and thirst for righteousness, for they shall be satisfied.

“Blessed are the merciful, for they shall receive mercy.

“Blessed are the pure in heart, for they shall see God.

“Blessed are the peacemakers, for they shall be called sons of God.

“Blessed are those who have been persecuted for the sake of righteousness, for theirs is the kingdom of heaven.

“Blessed are you when people insult you and persecute you, and falsely say all kinds of evil against you because of Me.

“Rejoice and be glad, for your reward in heaven is great; for in the same way they persecuted the prophets who were before you.”

Cornelius was somewhat surprised and relieved at the same time in what he heard. He half expected him to conjure up a miraculous happening, staged by the zealots, of course, and convince the masses that this is the time to rise up against the Roman occupation. He had no doubt that Jesus’ charisma is such that he could be able to raise the whole populace of Palestine, Syria, Persia and even Egypt to push Rome out of this part of the Mediterranean. Rome would be hard pressed to claim it back or even to keep the rest of its empire intact. But instead, Jesus started out his sermon with ten riddles at the end of which he stopped. He looks first at the twelve men that he chose with a whimsical smile. The men looked at each other with puzzled looks. Until Jesus told them to talk it out and make sense of it. Then like a flood bursting, the silence was shattered by hundreds of people conversing.

Jacob and Cestus were conversing silently to each other knowing that Cornelius would prefer mulling it over by himself. Closing his eyes, he mentally blocked out the noise around him to better analyze the words. Systematically, he started out on the most prominent word that was repeated nine times, ‘Blessed’. He remembered when he was young, while listening to Jacob telling him the story of Creation, he said that God blessed the animals, and then man, saying, “Be fruitful and increase in number; fill the earth and subdue it…” [Genesis 1:28 NASB]

He asked him what it meant to bless.

Jacob gave him a scholarly definition, “To bless is to endow with power for success, prosperity, fertility, longevity and so on.”

For the first time, he finally made the connection. In the beginning, mankind was like that ball. From the first book of Moses, it says that God formed man of dust from the ground but like the ball just sitting on the floor, man was without purpose… was without life, until God breathed into his nostrils the breath of life. But it did not stop there; God endowed to him with the ability to multiply… to fill the earth and eventually subdue it.

So, when Jesus said, “Blessed are those…” he was actually saying, “God blesses those…” God is the key. So, another question rose in his mind, “Who are the recipients of God’s blessing in Jesus’ sermon?”