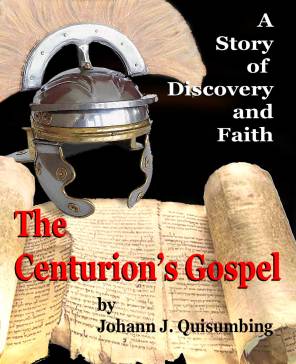 The next day, Cornelius was at his desk writing his report when Cestus entered.

“Sir,” Cestus said. “One of our spies has reported that the Nazarene was not at the house of the fisherman. He was told He snuck out in the middle of the night. Even his followers were looking for him.”

“Very well. Have him go back to the house and follow the fisherman.”

Just as he was about to leave, Cornelius inquired, “Have you seen the lad? He does not seem to be out and about this morning.”

“He is down below, sick in bed again. He has been in and out of bed sick three times already this past month.”

“Send for the physician. I will be down in a while to see him.”

A few minutes later, He found Trax in bed being fed some broth by Jacob.

“Hello lad. How are you feeling?” He puts his hand on his head. His head was hot with fever.

Trax smiled up at him and then made a face at the taste of whatever Jacob was spooning into him.

“It is supposed to taste bad or else it would not be good for you.”

Trax gestured with his hands that he’d rather it be bad for him. Cornelius laughed out loud and tousled the boy’s curly hair. He was concerned for the boy but it seems like Trax will be fine in a day or so. Then he will be running around like himself.

Later that morning, Cestus told him that the spy he sent to watch Simon Peter reported that many people from the city including the one he was to follow were heading out to the hills about seven miles south-west of Capernaum over looking the inland sea.

“Get out of that armor, Cestus. Choose three men all in nondescript clothing and have them saddle six horses. We are going out there.”

Cornelius went back into the house to talk to Jacob.

“It looks like Jesus of Nazareth is out on the hills south-west of the city. As usual he has attracted a large crowd. Do you wish to come?” Jacob looked at him eagerly but then looked over at an already sleeping Trax. “Do not worry about Trax. The physician will be here later and Porcius will look after him. He is fond of him too.”

So, they rode out.