Tradition or What the Bible Really Say

As far as I can remember, in every traditional Christmas story heard, read and viewed, I always found Joseph and a very pregnant Mary traveling to Bethlehem on a skinny donkey. When they arrive, they find no public inn available because of over-crowding except for a space in a stable already inhabited by a cow, a donkey and some sheep. Just as Mary was about to give birth, the Bethlehem Star would burst through a hole in the roof to shine upon the newly born baby Jesus. Then shepherds would come first then the three wise men.

This version of the Christmas Nativity story, according to tradition, was first illustrated like this during the Dark Ages by the legendary, Francis of Assisi.

I must admit that I had always found this version quite magical but was it biblical? I mean, was it presented the way the Lord God intended? Let us see…

Luke 2:4-5
Joseph also went up from Galilee, from the city of Nazareth, to Judea, to the city of David which is called Bethlehem, because he was of the house and family of David, in order to register along with Mary, who was engaged to him, and was with child.

The verses above only narrated the journey of Joseph and Mary from Nazareth to Bethlehem with no other clear description on what was their mode of transportation or the conditions of the journey.

It may be that they did travel by donkey as tradition suggests. However, there are other considerations found in Scripture that may add to their journey story.

Nazareth is found in the region of Galilee which is about 80 miles as the crows flies to Bethlehem. At most traveling there by donkey using the established roads would take about 3 days trip. But Joseph and Mary being Jews were faced with a more arduous journey. Why? Let’s look at this map of Israel at the time of Jesus’ birth.

Joseph and Mary could not take the shorter and more direct route because to do so, they would have to travel through the region of Samaria. Jews avoid travelling through Samaritan territory. Why? The people of Samaria were hated by the Jews. [To fully understand the enmity between these two people, you can open your Bible in several books of the Old Testament.]

So, what would be their route? Let’s look at the map again. 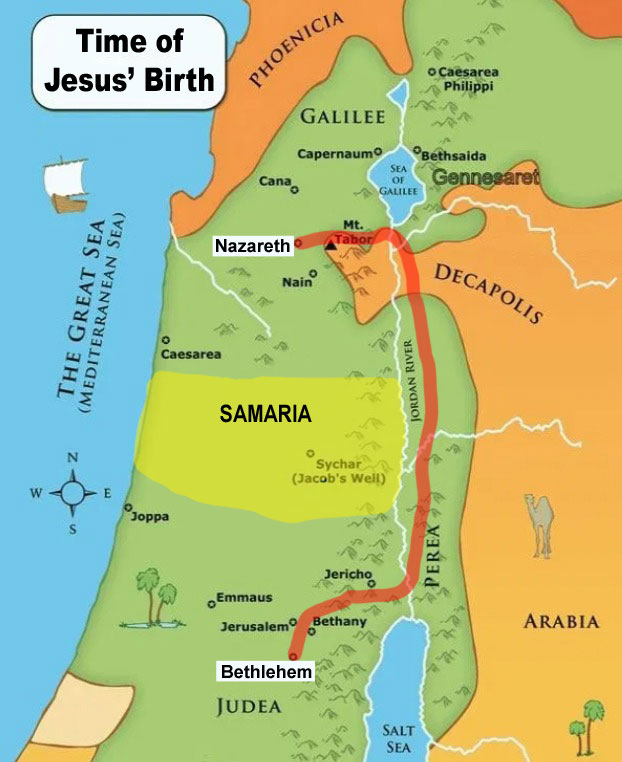 As Jews, they would have skirted the Samaritan territory by taking the much more longer and risky route. This would mean at least a week’s journey time through hazardous country. Considering this added information, I really doubted that Mary could have ridden on the bony back of an ass 20 miles a day for a week or so. More than likely, she rode on a cart accompanied with other folks making the same trek to Judea.

So, they reached Bethlehem…

Luke 2:6-7
While they were there, the days were completed for her to give birth. And she gave birth to her firstborn son; and she wrapped Him in cloths, and laid Him in a manger, because there was no room for them in the inn.

In the stories told and the movies I watched, Mary and Joseph always arrived in despiration to find lodgings because of extreme labor pains. But if you consider closely the words of Luke 2:6, ‘While they were there, the days were completed for her to give birth.’ I believe that what was implied was that they were already in Bethlehem for at least a day or so.

How about Jesus being born in a stable because there was no more room in the inn?

People got the idea of the stable mainly because the baby was laid in a manger. Understandable but in truth, not exactly accurate. Where the Bible only offered conjecture, archaeology may shed some light.

Based on archaeological digs in Bethlehem, the average houses looked almost like the image below.

What they unearth was that inside the house was an area for living, eating and sleeping. This living area part was on a large raised platform. The sunken area was reserved mostly for the household’s livestock which were usually kept indoors during the winter time.

Mary (in all probability) gave birth in the sunken area of a first century Bethleheman house which probably belonged to the kin of Joseph who readily took them in. By the way, the ‘inn’, in actuality, is usually the upper room or guest room built on the roof which was already occupied by another kin folk of Joseph who arrived there first. Hence the reason ‘there was no room for them in the inn’ (vs7). Fortunately for Joseph, there were enough female kin to help with the birth.

In my next post, we’ll talk about the part played by the shepherd and exactly who it is who was born in such humbling conditions.