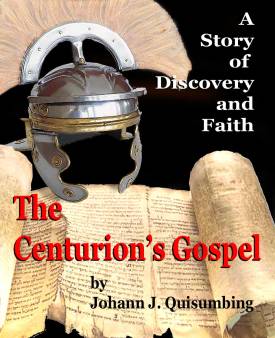 Later, in Arturos’ quarters, General Alto gave them their orders. “Tribune, your cohorts will be relieved in two weeks. They have earned some rest at Caesarea. However, Arturos, you will be stationed in Jerusalem with at least ten squads of your cohort.”

“Centurion, the governor wants you back at what you were doing, as soon as possible. He is giving you a squad of Equites Legati*. This is my suggestion. Tighten up your network of informants. With the light cavalrymen, you are to report more frequently, even if you have nothing to report. The governor demands it. He feels that with the biggest Jewish festival coming in a month or so that something significant is going to happen. He does not want to be caught unaware again.”

“Yes sir. I will leave in a couple of days.”

“Oh yes, I almost forgot. He wants you to be closer but not necessarily in Jerusalem. There is a supply outpost in Emmaus. It is only seven miles from the city. Establish yourself there within the week.”

“I know you want to closely follow this Jesus fellow, Centurion. You need not fret. He seems to have moved his operation to Judea and around the Perean Basin since last week. Apparently, this Jesus wanted you to know where he will be. One of his closest followers approached Centurion Porcius in Capernaum and gave him this note. I was at the Bethsaida fort when he reported to me. Since, we were already coming here I figured I will give it to you myself.” He handed the folded parchment to him.

When he opened the note, what was written was a single Hebrew word, ‘Bethany’.

After a good nights rest, Cornelius opted to leave that day for Judea. He dispatched Nacob and Lyca, two of his best men as well as three of the light cavalrymen to Capernaum. They will hand over written orders to Porcius. The three cavalrymen will be stationed there. Nacob and Lyca will then bring whatever personal gear left there to Emmaus.

Flavius came up to him as he mounted. “Well, it looks like I will be in Jerusalem with the Tribune. I will see you there in two weeks.”

“Until then,” he said with hand raised in farewell as he led his contingent of fifteen men who rode on two wagons and the remaining four cavalrymen out the fort.

They actually did good timing. At the end of the second day, they rolled into the outpost about a mile outside of Emmaus. It was actually a small fort manned by only forty men. It was extensive mainly because the animal pens and grain storage were within. The fort’s commander was an aging veteran who lost his arm. His name was Verinius. Not wanting to quit the Legion, the only position open to him was procurement. He was jovial and quite accommodating. His men were easily billeted in the barracks. Verinius offered his quarters since Cornelius outranked him, but he declined telling him that he is not there to take command of the fort and its operation. So, they set up his campaign tent.

That night, he could not sleep. He went over to his desks and lit several oil lamps. He stared a long time at the top sheet of a stack of parchments. It was the passages of the suffering servant that he translated. Since the battle, his mind kept returning to that nagging desire for understanding ‘why the Messiah had to suffer so and die?’