Now the Lord was gracious to Sarah as he had said, and the Lord did for Sarah what he had promised. Sarah became pregnant and bore a son to Abraham in his old age, at the very time God had promised him. Abraham gave the name Isaac to the son Sarah bore him. When his son Isaac was eight days old, Abraham circumcised him, as God commanded him. Abraham was a hundred years old when his son Isaac was born to him.

Sarah said, “God has brought me laughter, and everyone who hears about this will laugh with me.” And she added, “Who would have said to Abraham that Sarah would nurse children? Yet I have borne him a son in his old age.” [Gen 21:1-8]

Now Jesus himself was about thirty years old when he began his ministry. He was the son, so it was thought, of Joseph… the son of Isaac, the son of Abraham…

In the time of Herod king of Judea there was a priest named Zechariah… and his wife Elizabeth… Both of them were righteous in the sight of God, observing all the Lord’s commands and decrees blamelessly. But they were childless because Elizabeth was not able to conceive, and they were both very old.

Then an angel of the Lord appeared to him, standing at the right side of the altar of incense. When Zechariah saw him, he was startled and was gripped with fear. But the angel said to him: “Do not be afraid, Zechariah; your prayer has been heard. Your wife Elizabeth will bear you a son, and you are to call him John.”

The child grew and was weaned, and on the day Isaac was weaned Abraham held a great feast. But Sarah saw that the son whom Hagar the Egyptian had borne to Abraham was mocking… [Gen 21:9] 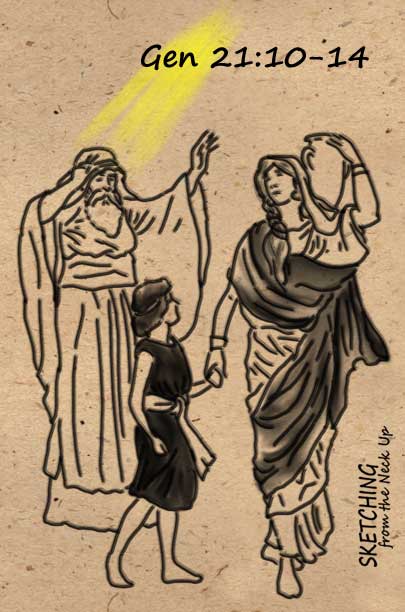 …and she said to Abraham, “Get rid of that slave woman and her son, for that woman’s son will never share in the inheritance with my son Isaac.”

The matter distressed Abraham greatly because it concerned his son. But God said to him, “Do not be so distressed about the boy and your slave woman. Listen to whatever Sarah tells you, because it is through Isaac that your offspring will be reckoned. I will make the son of the slave into a nation also, because he is your offspring.”

Early the next morning Abraham took some food and a skin of water and gave them to Hagar. He set them on her shoulders and then sent her off with the boy. [Gen 21:10-14]

vs 12  – “…it is through Isaac that your offspring will be reckoned.”

She went on her way and wandered in the Desert of Beersheba.

When the water in the skin was gone, she put the boy under one of the bushes. Then she went off and sat down about a bowshot away, for she thought, “I cannot watch the boy die.” And as she sat there, she began to sob.

God heard the boy crying, and the angel of God called to Hagar from heaven and said to her, “What is the matter, Hagar? Do not be afraid; God has heard the boy crying as he lies there. Lift the boy up and take him by the hand, for I will make him into a great nation.”

Then God opened her eyes and she saw a well of water. So she went and filled the skin with water and gave the boy a drink.

God was with the boy as he grew up. He lived in the desert and became an archer. While he was living in the Desert of Paran, his mother got a wife for him from Egypt. [Gen 21:14-21]