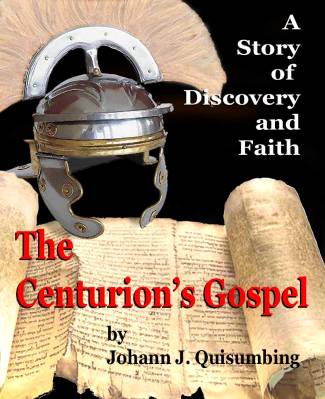 The winter was harsh out here in the wilderness east of Gadara. Four cold months had past. The fort was built on top of a table top plateau. The plateau had only one way in; a wide naturally sloped ramp that descended into a valley. The other three sides were sheer drops to the bottom of a deep canyon. This made it an ideal defensive location for the Romans. Because wood was scarce, the engineers dug a deep trench spanning the entrance of the plateau leaving a bridge in the center wide enough for wagons. Then they used the dug up material to build up a fifteen foot high earthen works leaving a gap in the center for a gate. Finding a ready supply of shingle rocks, they also manage to build up six foot tall walls with battlements on the earthen works.

On one particularly cold morning, Cornelius and Flavius were inspecting the high fortified earthen works in the trench. An unseasonable squall came in from the west and it brought chilling rain off and on instead of snow for the past two days.

“Well, there are no signs of erosion,” Flavius shouted from one end of the trench. “The rain did not even pool up in bottom of the trench.”

“Good thing too,” Cornelius called back. “That last squall last night brought in a lot of rain. But it looks like the engineers did their job well. Come, Flavius! Let us go back in out of the cold.”

Cestus was on the top of the trench holding a length of rope waiting to pull them out. When they finally climbed out, they went back into the fort through the stout gates. To avoid walking in the chilled wind, they walked in between the rows upon rows of large campaign tents. Occasionally, they would stop to warm their hands with a group of legionnaires huddled around a brazier. When they finally reached Cornelius’ tent, Jacob was there with hot spiced wine waiting for them.

Looking around, Flavius asked, “Where is the lad?”

“Cestus had him doing punishment duty,” Cornelius and Jacob were chuckling. “He is standing watch near the latrines at the far end of the camp.”

Flavius was laughing. “You have to admit that his practical joke on the fifth squad was inspiring. When I saw that ram dressed up in Optio Gallino’s armor butting its head against those men, I was laughing out of my skin. They should not have teased him so much.”

“Yes, it was amusing, until that same ram went into Tribune Arturos’ tent and almost burnt it down when it knocked down a brazier. The lad was lucky that he was not punished harshly. But he did get an earful from the Tribune.”

“Oh yes, we could hear him way in the other side of the camp. Do not fret, you know the Tribune is as fond of the boy as we all are.”

Flavius walked over to the table where Cornelius had all his books open and loose parchment papers were strewn over them. “Are you still studying this manuscript of?” he peered closely at the translated title, “I s a y a h? I thought you would be finished with it by now.”

“Cornelius is not as adept in reading old Hebrew as he is to speaking it.” Jacob said off hand. “But he is persistent.”

“Besides which that I have been busy with the Tribune and looking over your shoddy work as well.”

“I see. I see. I know when I am no longer welcomed. I will leave you to your scholarly work.” He left the tent laughing.

Jacob was also wrapping his cloak around him. “I will bring this hot food to the boy. I shall return soon.”