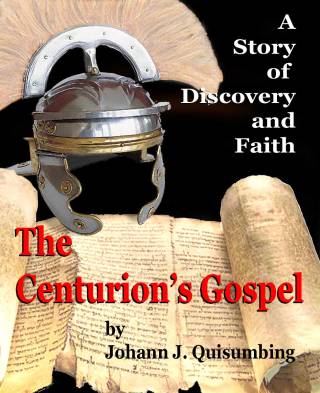 Two months have past since the confrontation at the Temple. Jesus wanted an expedient route back to Galilee, so, to the quiet displeasure of Simon, Judas Iscariot and a few of the others, they journeyed back through Samaritan country. One of the villages they visited, Sychar, greeted them with open arms. Cornelius was later told by Andrew, Peter’s brother that Jesus and a few of them then, came through Sychar only to purchase food for the trip back to Capernaum. They ended up spending almost four days with Jesus preaching about the Kingdom of Heaven and that salvation was nearby. And according to Andrew it all started when Jesus talked to a woman by the well. The villagers wanted to stay longer but Jesus told them that they had to go. Other villages they went through, some were welcoming some were not. In fact, there was one particular Samaritan village that ejected them that on a hill overlooking that village, James and John plucked up their chest and requested of Jesus that they may ask God to righteously rain fire upon that sinful village.

At first everyone was quiet. The fire that came from heaven, as Cornelius recalled only occurred in the stories of the destruction of Sodom & Gomorrah, when Elijah asked God to send fire down to first burn up his oxen sacrifice against four hundred Baal priests and then when he was being arrested fire consumed the soldiers sent three times. Cornelius, who have seen much death, cringed at the thought of such power that can destroy an entire city being unleashed upon that village or onto anyone. Jesus turned and rebuked them. Both brothers bowed their heads in shame. Andrew, the jester among the group whispered a little too loudly, “Sons of thunder.” Laughter broke out among the men, so much so, that even Jesus was laughing when he went to the brother and embraced them both.

An early winter seem to have set in. Large patches of snow dotted the hillsides around Capernaum. Jesus had mainly focused most of his time in teaching his closest disciples. Twice Cornelius was ordered to report to Pilate at his winter residence in the port city of Caesarea where the Mediterranean climate was more to his liking. The first meeting was on Zealot activities in the south which was deemed insignificant enough for any action to be taken at this time. The second meeting was an alert tactical meeting for all officers. The meeting was made up of five Tribunes and fifteen Senior Centurions including Cornelius.

He was quietly talking with Arturos and Flavius when Pilate entered the room followed by General Gaius Alto, his second in command, and Tribune Marcianus. Everyone there snapped to attention.

“At ease, gentlemen,” Pilate said. “The Emperor saw fit to intervene between the conflict between the Arab king, Aretas IV of the Nabataeans, and our friend, ahem… Herod Antipas.”

The men chuckled knowing what Pilate really thought of Herod.

“I need not remind you the reason behind this conflict.^ This region is volatile enough. The Emperor had tasked me to commit our forces. Understand this, gentlemen, we are not at war with Aretas. We are only there as a reminder of Roman interests in the region.” Turning to Gaius Alto, “General Alto, the floor is yours.” The room again came to attention as Pilate left the room followed by Marcianus.

[^ The cause of the conflict between these two kings started when Herod Antipas divorced his wife Phasaelis who was the daughter of Aretas IV and had shamefully sent her away.]

Alto gestured for all of them to gather around a large table with several large maps on it. The map of Palestine, which was intricately drawn in great detail on a tanned hide was on top.