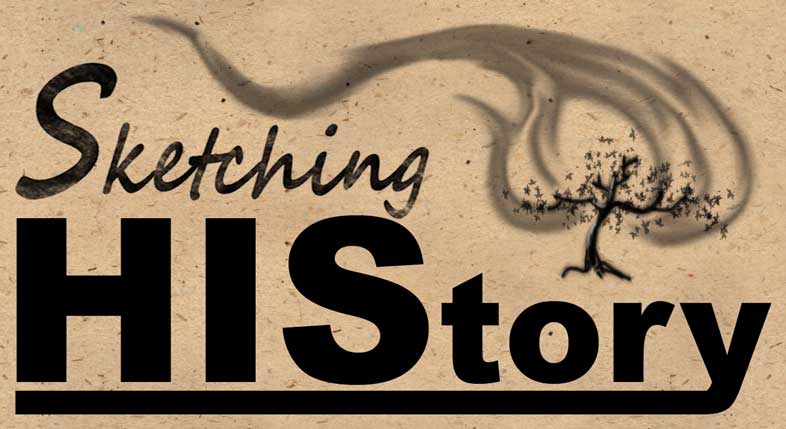 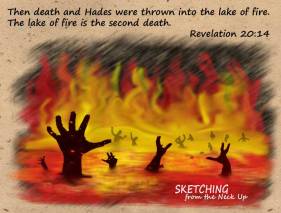 Even before Adam and Eve were cast out of Eden, God had a plan for mankind’s salvation… that is, salvation from mankind’s ultimate demise, the 2nd Death or Hell.

The problem is that mankind had sinned and upon their expulsion from the protective environment of Eden, they had to contend with surviving the wilds of the earth… ON THEIR OWN! This means that because of sin, they were not entitled to the protection of God and the reality of Adam and Eve’s situation in being thrust into the wild is guaranteed to lead to their quick death. So, since God’s plan require that they survive and multiply, I feel safe enough to theorize on what may have happened between Genesis 3 and 4. 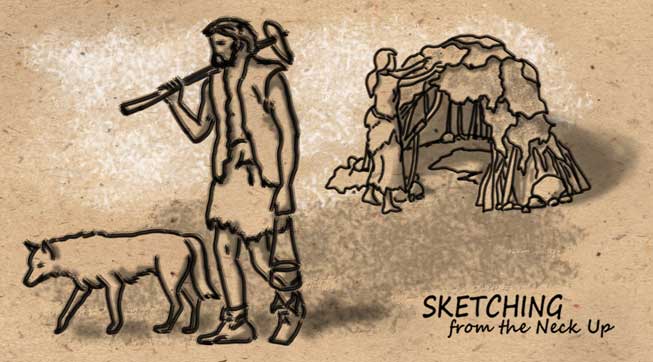 I believe that God caused Adam and Eve to go through… this is the part of me who loves science fiction… some kind of dimensional gateway to arrive in a part of the earth where they will not easily become prey. I don’t think they would end up in an Amazonian like jungle. Have you ever watched the Discovery Channel’s ‘Naked & Afraid’? Imagine Adam and Eve in that same situation except they have no tools and no survival skills. After one night there, the accompanying camera crew would probably be calling in for body bags. I think the Lord would have made sure that they would have ended up in a savanna-like environment. They would first find a shallow cave for shelter. Through trial and error, they would get a fire built and develop primitive stone tools. (Talking about the ‘stone age’.) Eventually, they would leave their cave dwelling and seek out a land that they can till and farm of which by the start of Genesis 4, the Lord made sure they were successful.

Once they were secured, they were now free to proceed with God’s plan (whether they knew it or not). 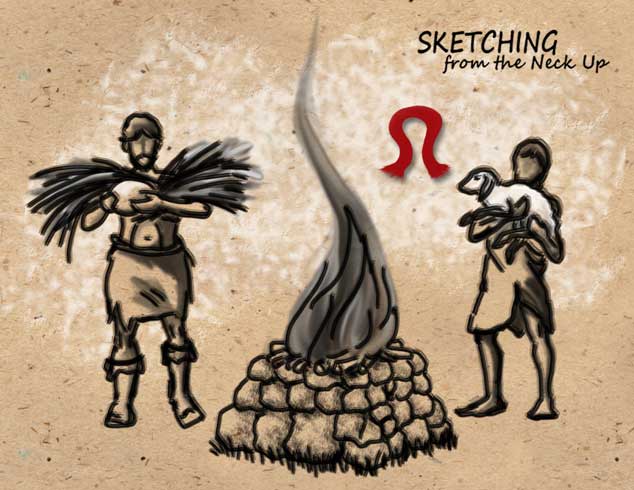 Adam had relations with his wife Eve, and she became pregnant and gave birth to Cain. She said, “With the help of the Lord I have brought forth a man.” Later she gave birth to his brother Abel.

Let us look closely at the offering. Both young men, farmers in their own right, were delighted in their respective fruitful endeavors and had decided to bring a thanksgiving offering to God. For Cain, he brought some of the crops that he successfully grew. Abel, whose vocation was in animal husbandry, brought in the firstborn of his flock and offered the fattest of portions to the Lord. Let us assume that both young men were genuinely sincere in their offerings. So, why did God reject Cain’s?

There are strong beliefs that God commanded Adam, after the fall, that if anyone seeking God’s favor, they are to shed the blood of innocent animals, and after their death to burn part or the whole of their bodies by fire. This lesson would have been passed on to his children. Cain, though sincere, should have known better.

You are probably wondering why there is a Crimson Thread symbol over Abel’s offering. This image of Abel holding a firstborn lamb for the purpose of sacrifice is representative of Jesus being called the ‘Lamb of God, which taketh away the sin of the world’ (John 1:29 KJV). We will see more of this representation in the Old Testament. 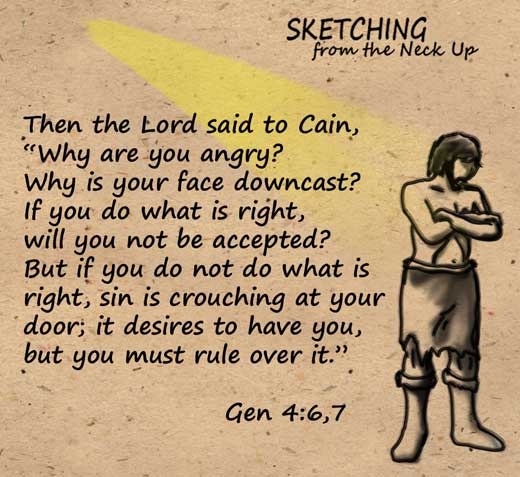 So Cain was very angry, and his face was downcast.

Then the Lord said to Cain, “Why are you angry? Why is your face downcast? If you do what is right, will you not be accepted? But if you do not do what is right, sin is crouching at your door; it desires to have you, but you must rule over it.” [Gen 4:5b-7]

The rejection of Cain’s offering, does not mean that God rejected Cain himself. In truth, Cain only made an assumptive mistake. However, God did see the pride in him which was feeding his anger. So, God reached out to show him the way. Unfortunately, pride won out over reason and sin did not just claim Cain only… 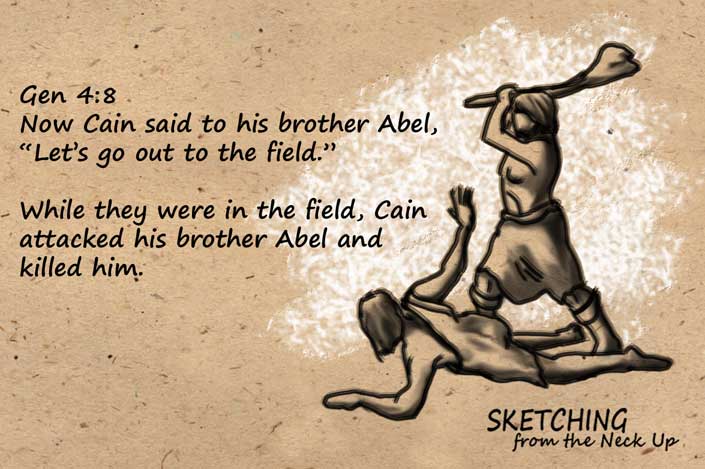 Then the Lord said to Cain, “Where is your brother Abel?”

There is much to cover on what happened to Cain in our next post.

Malice in the heart ends in murder by the hands. Cain slew Abel, his own brother, his own mother’s son, whom he ought to have loved; his younger brother, whom he ought to have protected; a good brother, who had never done him any wrong. What fatal effects were these of our first parents’ sin, and how must their hearts have been filled with anguish! Observe the pride, unbelief, and impenitence of Cain. He denies the crime, as if he could conceal it from God. He tries to cover a deliberate murder with a deliberate lie.

Cain was cursed from the earth. He found his punishment there where he chose his portion, and set his heart. Every creature is to us what God makes it, a comfort or a cross, a blessing or a curse. The wickedness of the wicked brings a curse upon all they do, and all they have.

Cain slew his brother, because his own works were evil, and his brother’s righteous (1 John 3:12). In consequence of the enmity put between the Seed of the woman and the seed of the serpent, the war broke out, which has been waged ever since. In this war we are all concerned, none are neuter; our Captain has declared, He that is not with me is against me. Let us decidedly, yet in meekness, support the cause of truth and righteousness against Satan. [Matthew Henry Commentary]

But the Lord will not allow evil thwart His plan. Hope continues… 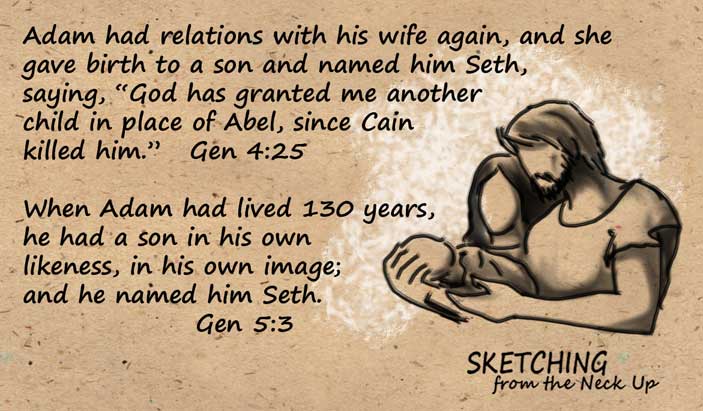 Adam had relations with his wife again, and she gave birth to a son and named him Seth, saying, “God has granted me another child in place of Abel, since Cain killed him.” [Gen 4:25]

From the birth of Seth as we will see in Genesis chapter 5, God (in the background) kept close watch with a specific family line. 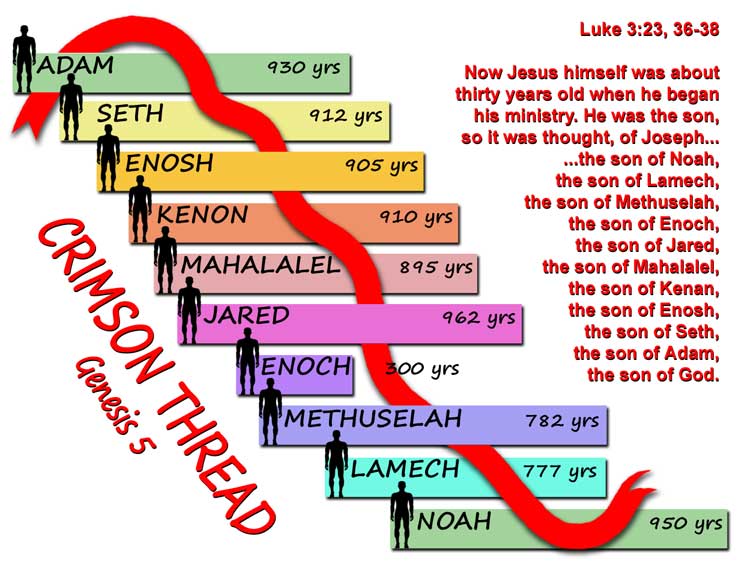 This line is a direct Crimson Thread to Jesus Himself, the Son of God which is listed out in His genealogy.

Here is a Worthy Note for you.

When ever I am reading Scripture and I come to a passage that clearly stuck out, I tend to flag it for further study. Near the tail end of Genesis 5 is one of those interesting flags. There are times that Scripture can be monotonous by patterns of repetition. In this fifth chapter, we have one of those patterns that when read out loud on the pulpit, the preacher might notice a number of nodding heads. In this case, what would be read is the genealogy of Adam family line with each one giving birth to a son and after living close to an eon, and then they die, except when the repetition is interrupted with Enoch who only lived for less than 400 year and he did not die. You heard me right. Enoch, to this date, had not died!

Enoch was the seventh from Adam. Godliness is walking with God: which shows reconciliation to God, for two cannot walk together except they be agreed, Am 3:3. It includes all the parts of a godly, righteous, and sober life. To walk with God, is to set God always before us, to act as always under his eye. It is constantly to care, in all things to please God, and in nothing to offend him. It is to be followers of him as dear children. The Holy Spirit, instead of saying, Enoch lived, says, Enoch walked with God. This was his constant care and work; while others lived to themselves and the world, he lived to God. It was the joy of his life. Enoch was removed to a better world. As he did not live like the rest of mankind, so he did not leave the world by death as they did. He was not found, because God had translated him.

By faith Enoch was taken from this life, so that he did not experience death: “He could not be found, because God had taken him away.” For before he was taken, he was commended as one who pleased God. [Hebrew 11:5]

He had lived but 365 years, which, as men’s ages were then, was but the midst of a man’s days. God often takes those soonest whom he loves best; the time they lose on earth, is gained in heaven, to their unspeakable advantage. See how Enoch’s removal is expressed: he was not, for God took him. He was not any longer in this world; he was changed, as the saints shall be, who are alive at Christ’s second coming. Those who begin to walk with God when young, may expect to walk with him long, comfortably, and usefully. The true christian’s steady walk in holiness, through many a year, till God takes him, will best recommend that religion which many oppose and many abuse. And walking with God well agrees with the cares, comforts, and duties of life. [Matthew Henry Commentary]

In our next post, we will cover the descendants of Cain and what they have done to move God to judge mankind with a devastating effect.