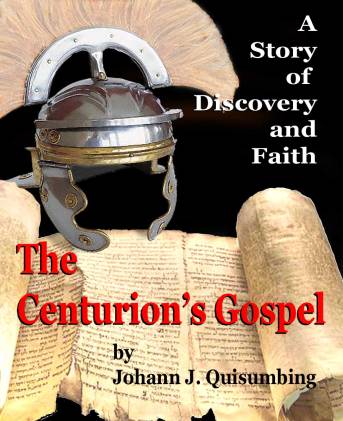 As Jesus led them northward along the ridge of the Mount of Olives, keeping his eyes on that incredible structure Cornelius recalled many things that he had read but one particular story stood out. The mount that the temple was built on was the very same mount that God tested Abraham’s faith. God commanded Abraham to bring his son, Isaac – the son of promise, to this place and offer him up as a sacrifice. With no hesitation, Abraham brought Isaac here and just as he was about to plunge his knife, the Lord stayed his hand. Isaac’s life was spared and Abraham saw that God had provided a big horn ram with its horns tangled in a thicket as a substitute offering. After God blessed him, he named this mount ‘The Lord Will Provide.’

They followed a track that went through an extensive olive grove. When they emerged they could see that the bottom side of the mount into the whole Kidron Valley was blanketed with thousands of tents. This was the second day of the Festival of the Tabernacles or Booths as it was better known because those who had houses in the city built make shift tents out of palm branches on their roofs and they lived in it for seven days. The reason of which was to commemorate the time when the Israelites lived in tents out in the wilderness on their way to the Promised Land.

There were people everywhere feasting and obviously getting drunk. The more pious were bringing their grain offerings through the east gate.

Before they go among the crowd, Jesus, who had covered his face from being recognized said, “The religious leaders would be looking for me. We will enter the Temple on the north side.”

Because of the crowd, it took about an hour to get to the north side. When they turned the corner, Cornelius saw the walls of a tall fortress that was adjacent to the Temple Mount; its towers rising even higher than the temple. It was called the Fortress Antonias, so named after Mark Anthony. To the Romans, it was the Praetorium which can garrison a whole cohort*. It was also the official residence of the Governor General when he was in the city.

“Look, sir.” Cestus was pointing at the waving banner on one of the towers. “It is the banner of the Twenty-fifth Praetorian cohort.”

“Yes. The Governor is in residence.”

“No. Not just yet.”
The gate on the north side was called the Sheep Gate. During the spring festival of the Passover, hundreds of flocks of sheep are driven to waiting pens outside this gate. Then a chosen group of Levites would separate those sheep that were considered unblemished. They would then drive them through this gate and up through a maze of corridors that led up to the Temple complex. Because this autumn festival is dedicated to grain offerings the pens held few sheep for regular sacrifice. The narrow corridors however were packed with people inching their way up the sloped passage ways. It was another two hours when they finally reached the top.

From the dark corridor, they went through a tall silver plated gate into a high ceiling portico. Cornelius had to squint his eyes against the glare for a few moments. As his eyes adjusted, they emerged unto an open plaza known as the Court of the Gentiles. Though he knew that the plaza was going to be big, he still could not help being awed by the sight. Along the sides of the whole plaza were long corridors with two rows of tall white columns supporting high ceilings. The columns on the north, south and western sides supported two enclosed levels with red brightly tiled roofs. Cornelius surmised that they were mostly used as sleeping chambers and offices by the priests. The columns along the east side supported an open platform. There were visible Temple guards patrolling along the battlements.

Avoiding the majority of the crowd on the plaza floor, they skirted the milling mass of people by moving in between the columns which were not as crowded. They moved along the eastern side until they were across from the front of temple.