Introduction – The Road to Emmaus

There is a road that goes from Jerusalem to the coastal town of Jaffa. No, I’m not talking about the modern day highway where folks from Jerusalm make their way to the hip city of Tel Aviv. Nope, I’m referring to some 2000 years ago, an ancient caravan road about 8 feet wide, enough for five Roman legionnaires marching abreast. It was probably stone-paved and metaled built by their own engineers.

Now, it was mid-day Sunday, the beginning of the week right after the most eventful Passover in history. Two men, Jews, by the way they’re dressed, were just exiting the north-west gate of the city. They were heading back to their home in the village of Emmaus, about seven miles away. After two weeks celebrating in the city, you would think that these two men would look happy to head home, but instead they were quite somber. Even more so, when they walked by a hill just outside the walls. The hill had a gruesome reputation. The occupants of the city knew it as the hill of the skull. It was frequently used by the Romans for crucifixion. The two men paused to look up to find three empty crosses, the center of which still had the dark stain of blood. They quicken their pace.

As they crested a hill, they began discussing the past events. They were so at it that they didn’t notice a third person behind them, listening. That person was Jesus himself. But they did not know it was him, because they were prevented to recognize him.

He asked them, “What are you discussing so intently as you walk along?” 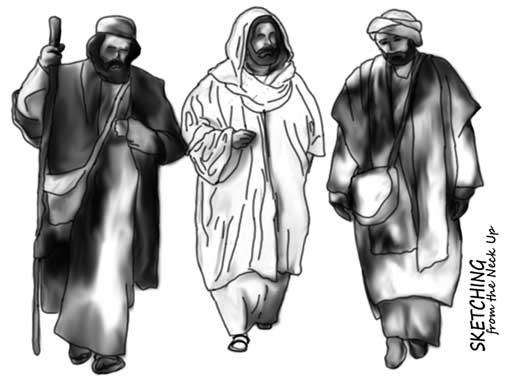 They stopped short, sadness written across their faces. Then one of them, Cleopas, replied, “You must be the only person in Jerusalem who hasn’t heard about all the things that have happened there the last few days.”

“The things that happened to Jesus, the man from Nazareth,” he said. “He was a prophet who did powerful miracles, and he was a mighty teacher in the eyes of God and all the people. But our leading priests and other religious leaders handed him over to be condemned to death, and they crucified him. We had hoped he was the Messiah who had come to rescue Israel. This all happened three days ago.”

“Then some women from our group of his followers,” said the other disciple, “were at his tomb early this morning, and they came back with an amazing report. They said his body was missing, and they had seen angels who told them Jesus is alive! Some of our men ran out to see, and sure enough, his body was gone, just as the women had said.” [Luke 24:13-24]

Let me pause the story here.

Sketching HIStory is suppose to be about telling God’s story from the beginning to… well… when it came to Him, there is no end. So, why am I starting HIStory at the time of Jesus Christ’s resurrection?

Because of the questions that were in their hearts.

A good story for me always need a good reason for the telling. Questions have to be asked. Now, on that road to Emmaus, Cleopas and his companion had a lot of questions to contend with.

Just a week before, they were ecstatic to see Jesus, the Messiah, coming into the city like triumphant king as foretold. His miracles and teachings made him the man to see and to put a lot of hope on. They were expecting great things, but then their own leaders had him killed on the cross. Then, confusion was added to their distress, when the city was stirred with the rumors of his impossible resurrection.

What is going on? How can this happen? Why did he have to die? Then, it becomes more personal. What’s going to happen to me? In the long run, all those questions target God. Questions like…

Why is God allowing this to happen?

Does He not care?

Deep inside, we want answers to these questions.

Now, I am going to put my neck out on the chopping block and un-apologetically testify that the source of all those questions can be answered by reading and understanding God’s story. But don’t take my word for it.

Let’s get back on the road and our story. After Jesus heard the concerns of the two followers, I can almost see the empathy showing on his face and a gleam in his eyes like he knew something that they didn’t. With a knowing smile, he fondly placed his hands on their shoulders and said, “You foolish people!”

No, he is not calling them ‘stupid’! The Greek word of foolish is anoétos (pronounced as an-o’-ay-tos) which means ‘properly, non-thinking, i.e. not reasoning through a matter (with proper logic). In other words, they who were taught the Scriptures since childhood should have known better.

“You find it so hard to believe,” Jesus continued, “… all that the prophets wrote in the Scriptures (Old Testament). Was it not clearly predicted that the Messiah would have to suffer all these things before entering his glory?”

Then Jesus took them through the writings of Moses and all the prophets, explaining from all the Scriptures the things concerning himself. [Luke 24:25-27 NLT]

Imagine, them walking seven miles being treated to the best Bible Study they’d ever heard by the best teacher that ever existed. Of course, that’s my personal opinion but an accurate one. I wish I was there with them. Wow!

In my next post, I’ll end this Introduction with a short walk-through about those writings that Jesus talked about. See you the next time.

One thought on “Sketching HIStory #2”