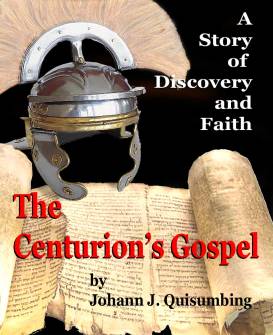 “Cornelius?” Jesus approached him. “I have matters that need attending at Nazareth. Do you wish to accompany us and be welcomed in my mother’s house?” Cornelius nodded his ascent. “Good! Matthew will wait for Peter and the others to return sometime tomorrow. They will meet us there.” Jesus looked at where Cestus waited by the picketed horses. “I suggest that you send your horses back. The trail we take will not be easy for them.”

“Are we going to walk to Nazareth?” He was not looking forward trekking through the Galilean range just by foot.

“No. We have these.” Jesus pointed amusingly to where Simon was leading three gray donkeys from behind the thickets.

“Very well,” Cornelius said laughingly. “I will send Cestus back with the horses.”
Nine hours later, Cornelius’ bottom was sore. Riding this small donkey was a challenge. At first, he rode it like his horse, but without a saddle and only a woolen blanket to separate him from the animal’s ridged backbone, he regretted it. Besides which his feet was hanging very close to the ground and managed to stub his toes on every boulder on the narrow trail. After an hour and much chiding from a laughing Simon, Cornelius relented and shifted his sitting position so that both legs were on one side with one knee resting on the base of the ass’ neck. He slipped off a couple of times but after a while he got the hang of it. Though Cornelius missed riding his horse, he had to grudgingly admit that they did good time. For these small animals were better suited for these rocky terrains.

They traveled mostly southwest from the Capernaum basin over the Galilean Range. By early night fall, they skirted around the north base of Mount Tabor and finally came upon the Old King’s Road which would take them to Nazareth. Cornelius recalled that this road, which was rebuilt by Roman standards, was as old as the time when the ancient Chaldeans raided the independent city states of this region. It was one of a network of established caravan routes as far as the great cities of Babylon and of Nineveh which was no more. This particular route led south through Gaza all the way into Egypt. Nebuchadnezzar, the greatest king of Babylon, led his vast armies down this road vanquishing what was left of the Philistines, all of Egypt and eventually Judah and Jerusalem. When they arrived at the house of where Jesus grew up, Mariam, his mother, was there waiting expectantly.

Cornelius was awakened by heated voices coming from the outside. By the angle of the sunlight streaming through the window, he surmised that the sun had been up for about two hours. He overslept. He groaned as he lifted his aching body off the sleeping palette. He and Simon slept in the wood crafting workshop. Simon, who was already up and about, left food for him on the worktable. Hearing the raised voices again, he goes out to investigate and found Jesus sitting on a pile of roughly hewn logs confronted by his brothers. Simon was standing slightly behind Jesus with his arms crossed and a stern expression.

“In three weeks is the Festival. You must go to the Festival, brother!” exclaimed James. “Many have already left you here but in Jerusalem, there are many there that are awaiting for you to perform your miraculous act. Think of what you can achieve.” As he was saying this, he was gesturing with wriggling fingers above his head.

“It is not yet my time,” Jesus responded quietly.

“Brother, it was you that chose this road. You openly proclaimed yourself to the public. What talk is this that it is not yet your time? Are you afraid that the Pharisees are out to get you? Then how much more should you go down to Jerusalem and show yourself to the people? After all, no one does anything in secret when he himself seeks to be known publicly.”

So Jesus said to them, “My time is not yet here, but your time is always opportune.”

“What are you saying?”

“The world cannot hate you, but it hates me because I testify of it, that its deeds are evil.” The brothers were about to object but he raised his hand up for silence and said, “Go up to the feast yourselves; I do not go up to this feast because my time has not yet fully come. But soon it will be and you will understand.” [John 7:7-8 NASB]

Cornelius stood aside as the brothers, shaking their heads, went into the workshop.