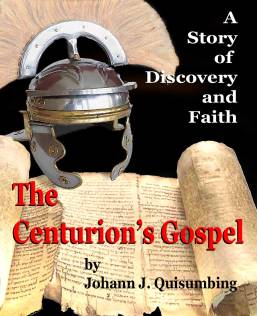 “Cornelius,” he says breathlessly. “He calls the disciples together!”

About an hour later, after they ascertained the location, Cornelius, Jacob, and Cestus rode to the same encampment south of Capernaum where Jesus gave his sermon. Cornelius saw that there were about seventy plus men milling around the tent waiting. As they dismounted, Jesus emerged from inside the tent accompanied by Matthew, Simeon and two of the Synagogue’s elders both recent followers. He called all the men together and started to organize them into thirty five pairs including Jacob who was paired with a young man from Judea called John Mark. Seventy men were chosen.

Jesus led them up to the top of a mount with a panoramic view of the whole area. Jesus gestured for all of them to look all around. The view to the other side of the great lake was clear, free of its usual misty haze. Just north of them, nearby, lies Capernaum with Chorazin just a little beyond. To the northeast, Cornelius could just make out Bethsaida. Looking south, he could see Magdala by the shore. More villages can be found among the ridges of Galilee in the west.

“The harvest is plentiful, but the laborers are few.” He said quietly to Matthew and Simon who were close to him. The he gazed at Cornelius and said with that knowing smile of his, “Therefore beseech the Lord of the harvest to send out laborers into His harvest.”

Then in a commanding voice, “Go; behold, I send you out as lambs in the midst of wolves.” They gathered around him to listen to his instructions. “Carry no money belt, no bag, no extra shoes; and greet no one on the way. Whatever house you enter, first say, ‘Peace be to this house.’ If a man of peace is there, your peace will rest on him; but if not, it will return to you. Stay in that house, eating and drinking what they give you; for the laborer is worthy of his wages. Do not keep moving from house to house. Whatever city you enter and they receive you, eat what is set before you; and heal those in it who are sick, and say to them, ‘The kingdom of God has come near to you.’ But whatever city you enter and they do not receive you, go out into its streets and say, ‘even the dust of your city which clings to our feet we wipe off in protest against you; yet be sure of this, that the kingdom of God has come near.’  I say to you, it will be more tolerable in that day for Sodom than for that city.”

Jesus then moved to the edge of the ridge and turned to the north. “Woe to you, Chorazin!” He declared loudly. He turned north east and also loudly said, “Woe to you, Bethsaida! For if the miracles had been performed in Tyre and Sidon which occurred in you, they would have repented long ago, sitting in sackcloth and ashes. But it will be more tolerable for Tyre and Sidon in the judgment than for you.” Then his focus shifted to down toward Capernaum. “And you, Capernaum, will not be exalted to heaven, will you? You will be brought down to Hades!”

Minutes after, down at the camp, most of the men have already left on their mission. Cornelius watched Jacob and a very enthusiastic John Mark take the north road toward Magdala. He fondly noted that Jacob too had a spring in his walk.