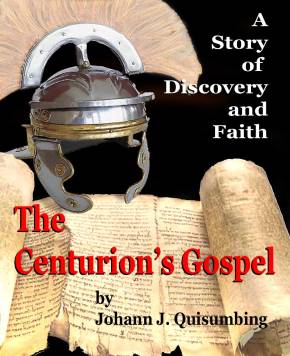 “Sir, we found him! He was on the road returning to Capernaum. Jacob went to him and pleaded that he comes to heal Trax. There were some that was against it, saying that he must not enter the house of a gentile; whatever that means. But Jacob pleaded even more then other men including the synagogue leader came up and told the teacher about the things that you have done for the people. So, he agreed and they are on their way here.”

“Good!” He and Flavius were about to enter the house when he paused. A thought occurred to him.

“What is it?” asked Flavius.

“If he is who I believe he is. Then, he does not have to come all the way here to heal Trax. All he has to do is will it to go away.” He looked at Cestus and asked, “how long would it take you to ride back to him?”

“Sir, I do not understand why you would do that,” asked a confused Flavius.

“The man is a holy man. If he comes to this house, the house of a non-Jew, he could be declared ‘ceremoniously un-clean’ which his enemies will use against him. I refuse to be the cause of that.”

Cornelius had another reason. He had no doubt in his mind that Trax will be healed. His mind was at peace with no fear at all. He could not explain it. But this test is for Flavius.

As he sat by Trax, looked at his pale figure, he asked Flavius to sit. “In about thirty minutes, Trax is going to get up from this bed well and healthy.” Before Flavius could say anything, Cornelius held up his hand. “I know you doubt. But I ask you to listen to what I have to say.”

So, Cornelius shared with him about his search to answers to his meaning of life questions. He confessed that the Roman religion that they both grew up with had never moved him like his belief in the one God of the Jews. Then he told him of what he had discovered from the Scriptures of this man Jesus that he is now convinced is from God.

“So, does this mean that he will move the people to go against us?”

“No! I truly believe not. I believe that whatever his task is, it is not just for the Jews but for the benefit of all mankind. The question is what that task is which I am even more determined to find out.”

Cornelius gauged that Cestus must have reached Jesus by now. He focused on Trax. The boy seemed hotter than before and the minutes ticked by. Then, just as Cornelius was about to doubt, Trax began to thrash violently. Cornelius had to pin his arms down while Flavius held his legs. And then, just as quickly it began, the thrashing stopped. There was no movement. Flavius asked if he was dead. But Cornelius saw that his breathing was getting stronger and the color was returning to his face. Then Trax opened his eyes and sat up. Cornelius helped him up from bed.

“You gave us a scare, lad. But it looks like you will be fine.”

Then, to the surprise of Cornelius and Flavius both, Trax opened his mouth and uttered, “Wha… what happened?”

Feeling tingly all over, Cornelius burst out with joyful mirth. Never had he heard Trax utter a sound. With tears in his eyes, he embraced him. Porcius and other men came dashing into the room to find a very much alive boy uttering that he was very thirsty.

Flavius turned to Porcius, “Break out the grog, you ol’ miser! This is the time to celebrate!”

Jacob and Cestus returned to find that the whole compound was celebrating. It was in the late hours of the night that Jacob entered the room where Cornelius was studying through Isaiah.

“Well, the lad is finally asleep. I will have to teach him his letters but I have no doubt that in a year he will be talking our ears off.”

“That would be something!”

Jacob came close and placed a hand on his shoulder and said, “The master wants to meet with you.”