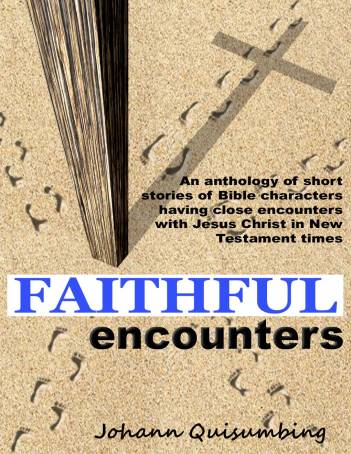 On the fourth day, he was lounging on the steps that overlooked the front courtyard and gate of Simon’s house. He was enjoying a bowl full of dates when from inside the house Martha, Simon’s older sister, emerged followed by Simon and some servants. In a quick pace, they went out the gate. Curious, Joram quickly descended the stairs, crossed to the gate and dashed after them. He followed them through the village but he was careful to hug the sides of houses and made sure he had sharp eyes for patrolling Romans.

He followed Martha and Simon out the village gate. They went down the road about a quarter of a mile to a crowd of people milling at the side of the road. They both approached a man who was sitting on a hewn log. The man stood to greet Simon with a hug. Joram realized that that man had to be the one who healed Simon, Jesus.

Martha who looked angry stood at a distance. The man Jesus took a step towards her and said, “Martha.”

“Lord, if you had been here, my brother would not have died.” Martha said in an angry and trembling voice. Then she bowed her head and sobbingly said, “Even now I know that whatever you ask of God, God will give you.” [John 11:21,22]

Sighing deeply she said to him, “I know that he will rise again in the resurrection on the last day.” [v24]

Then Jesus approached her and stood before her. Her face was bowed and downcast. “Martha, look into my eyes,” he softly said to her. She slowly raised her teary eyes to meet his. Then he gave her a reassuring smile and said, “I am the resurrection and the life; he who believes in me will live even if he dies, and everyone who lives and believes in me will never die.” She cast her face down again in shame. Jesus ever so gently lifted her chin and asked, “Do you believe this?” [v25,26]

She sobbed loudly and Jesus drew her closer to him so that her face cried on his shoulder. Martha said to Him, “Yes, Lord; I have believed that you are the Christ, the Son of God, even he who comes into the world.” [v27]

Then Martha hurried back to the village with her servant in tow. Meanwhile, Joram wrestled with the words that Jesus incredibly uttered, ‘I am the resurrection and the life; he who believes in me will live even if he dies, and everyone who lives and believes in me will never die.’ Joram was flabbergasted. He was thinking to himself on how anyone can make such a claim.

About fifteen minutes later, a sizable crowd was seen coming out, a number of them were Jewish leaders from the city paying their respect. They were following Mary, the youngest sister of Lazarus, who was walking fast ahead of them. Martha was just behind her. When Mary spotted Jesus, she sprinted the last twenty yards to him. Then she threw herself on the ground at his feet weeping loudly.

Her tear streaked face lifted to look imploringly at him and she said, “Lord, if you had been here, my brother would not have died.” [v32]

Jesus helped her up on her feet and she fiercely embraced him, burying her face unto his chest weeping loudly. As Jesus returned her embrace, he was openly weeping. The women among the crowd were also weeping loudly.

Then he looked at Simon and his daughter, Martha and asked, “Where have you laid him?”

If you want to support my writing, there are two options: