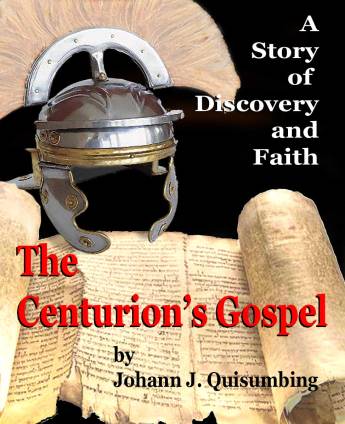 Cornelius had again seen the zealot a number of times at the synagogue mostly during the Sabbath worship. He had assigned Nacob to track his movements. Nacob had established his cover very well. Within the city, he is a smelly street beggar. Out in the countryside, he poses as an Arab shepherd. He had successfully followed the Zealot to a villa belonging to a rich merchant from Jerusalem. Though, this Simon is from Cana, a town west from here, up into the Galilean highlands, he frequently visits this villa. Nacob had also reported that this villa is frequently visited by numerous well-to-do young men some of which had recently arrived from Jerusalem. This interested Cornelius greatly. He had suspected that many of those in the Zealot faction came from there. He had arranged for them to be discreetly followed back to Jerusalem. At the same time, establish his network of spies there.

Meanwhile, his real interest is in the whereabouts of Jesus of Nazareth. He has not been in Capernaum since Cornelius acquired his house. When he heard that a tax official called Levi and six other soldiers were going to Nazareth to collect the taxes, he went with them in the hopes that this Jesus would be there. He brought Jacob along to ride with Levi in the wagon.

Nazareth is located in the heart of a valley surrounded by the highlands. It is a small farming village situated on the foot of a hill near what is known as the old King’s road which was built by an ancient Babylonian king.

When they got there, Jesus and his followers were not there. But he did find out that Jesus stirred up the men in the local Synagogue. He heard that they wanted to cast him off a cliff on the hill. Cornelius wondered what he would have said that stirred them like that. Jacob, after speaking with the synagogue leader, told him that Jesus was invited to read from the Scriptures.

“He read from the scroll of Isaiah.”

“The passage he read went like this, ‘The Spirit of the Lord is upon me, because he anointed me to preach the gospel to the poor. He has sent me to proclaim release to the captives, and recovery of sight to the blind, to set free those who are oppressed, to proclaim the favorable year of the Lord.’ What stirred the men was what he said after. He said, ‘Today, this has been fulfilled in your hearing.’ ” [Luke 4:18-21 NASB]

“Is he declaring himself openly, Jacob.”

“Yes, I believe he is… and it is incredible.”

“You said that he has family here. Let us find out where his house is.”

Jacob got directions from the rabbi. The house that they sought was at the bottom of the hill near the southern edge. It was not hard to find the house. Since they knew that Jesus was a carpenter, they followed the sound of sawing and hammering. At first, Cornelius thought the bearded man sawing on a large plank of wood was Jesus, but it turned out to be his brother, James. Two other brothers were working on some furniture just inside their workshop and a young woman, a sister maybe, was meticulously picking pebbles out of a basket filled with grain. It was she who saw Cornelius and Jacob approaching and then called the attention of the working men. They stopped their work. James put down his saw and walked over to them at the gate.

“Shalom,” James greeted back with a slight nod. “How may we be of service, masters?”

“Is this the house of Joseph the carpenter?” asked Cornelius offhandedly.

“This is the house of Joseph, but he has long been dead for some years. My brothers and myself run the business now.”