JOANNA THE HONORABLE WIFE
32 AD – A lesson of faith – South of Capernaum, Galilee 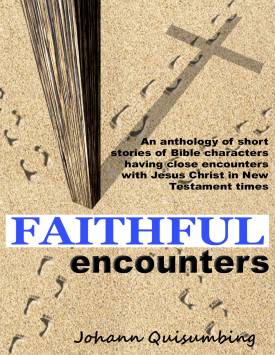 “My sisters, what shall we discuss tonight?”

“Master,” Joanna said. “Veronica had been telling us about how you healed her after twelve years of embarrassing bleeding. You said that it was her faith that made her whole. I have also heard you say the same thing to a blind beggar, to lepers and others that you have healed. What did you mean, Lord?”

“Veronica, please describe what your thoughts were before you reached out to touch the hem of my garment?” asked Jesus.

“Well, rabbi, I so wanted to get healed for I desired to be cleansed. I have been banned for so long from the Synagogue and the Holy Festivals of Jerusalem. I was desperate to be able to commune again with the Holy One in His Temple. So, when I heard you were going to be at Magdala, I raced there to implore you to heal me. But the crowd surrounded you and was too loud for me to plead for your attention. Then, when you started to walk near me, I knew this was my chance though at that time I did not really know what I was going to do. All I wanted to do was just reach out and touch you but all I touched was your hem.”

“Veronica, what did you hope for when you reached out?” asked Jesus.

“I, ah… don’t know. My healing was such a surprise. I was not expecting it. In fact, I was ashamed of myself because I was unclean and yet I touched you.”

“Fret not, Veronica,” smiled Jesus. “Your healing is proof that my Father in heaven did not hold it against you.” Looking at each of them, he laughed out humorously and said, “I can see by your faces that you do not understand what I am trying to impart. How many of you recall what the Scriptures said about the idol of the bronze snake?”

The women were silent and a few looked at each other shaking their heads. Joanna recalled the story very well but chose not want to speak out.

Jesus gestured for Matthew to relate the story. The women were enthralled as Matthew skillfully carried their imaginations through the sands of time, back when their forefathers wandered the wilderness for forty years. In a particular time when the Israelites were having a hard time on the road, the people grew impatient with the long journey, so they grumbled and spoke against God and Moses. So the LORD sent poisonous snakes among the people, and many were bitten and died. Then the people came to Moses and cried out for him to plead for the Lord’s mercy. Moses was instructed to fashion a snake out of bronze and attached it to a pole. Then, the Lord told them that anyone who was bitten by a snake could look at the bronze snake and be healed.

“What do you think happened after that?” asked Jesus.

“Many who were bitten looked and were saved,” answered one of the women.

“What of those that did not look?”

“Died!” They all answered.

“Master, was the idol magical? Did it have healing power like… like your clothes?” asked one of them.

“It gladdens me that this was asked,” Jesus said smiling. “Joanna, do you believe that my robe, that is, this robe holds any power?”

“Who here think that it does?”

Two women hesitatingly raised their hands. “Come! Both of you lay hold on the hem of my robe.” They came, sat by his side and each took hold. “Good. Now, close your eyes and think of something that you so desire. Veronica touched my hem and she was instantly healed. Wish for it right now.”

Except for Joanna, the other women leaned forward curious and expectantly. After a few minutes, nothing happened.

“Disappointed?” There were some nodding. “You should be. And you should have remembered what the Scriptures say about idols. “The idols of the nations are silver and gold, made by human hands. They have mouths, but cannot speak, eyes, but cannot see. They have ears, but cannot hear, nor is there breath in their mouths. Those who make them will be like them, and so will all who trust in them.” [Psalms 135:15-18] Seeing confusion in some of their faces, he explained.

“As soon as you believed that my robe had more power than to keep me warm, you turned it into an idol.” Reading their frowns, he chuckled, raised his hand and said, “Fear not. You are still learning. Now, let us go back to the lesson of the bronze snake. You have heard me say often that the truth shall set you free. So, here is the truth. Since, the snake was made by the hands of man, it held no power at all. So, the question is, how was it that those that were bitten were healed by just looking at it?”

Silence filled the room. “Joanna? Your ancestor gets bitten then he went to the snake blindfolded. What would happen?” asked Jesus.

Joanna’s eyes widened with understanding. “He would die!”

“Because he did not exactly obey what the Lord on High commanded.”

“Exactly right, Joanna! You see… The power that healed your forefathers was not the idol but the power of the One who commanded. So, when your forefathers that were bitten by the snakes looked at the bronze snake, what were they actually doing?”

“They believed and then they obeyed!” Joanna answered excitedly.

Jesus nodded his assent. “Veronica, you were healed not because you touched my clothing but because you believed who I was.”

Joanna looked at the other faces of the women and saw them nod in understanding.
Just as the group was leaving the tent of meeting, Jesus asked Joanna to stay for a moment.

“Joanna, thank you again for the generous supply you and your husband had provided for us. There will be much to do in the morning and so, I wanted to inform you of the plan tonight. Tomorrow, I will give instructions to the many disciples that have gathered here already. They will be sent out in pairs throughout this entire region in a similar mission that I sent out the Twelve last week. After which, you and the other women can go home for now. In two weeks time, the Twelve and I will meet you again in Capernaum at the house of Simon Peter’s mother in law.”

“Very well, master. May I ask, master, where will you go?”

“First, the rest of the Twelve will join me at Nazareth. Then we will go north to the land of the Gentiles.”

I hope you are enjoying the 35th segment of my ebook, FAITHFUL ENCOUNTERS.