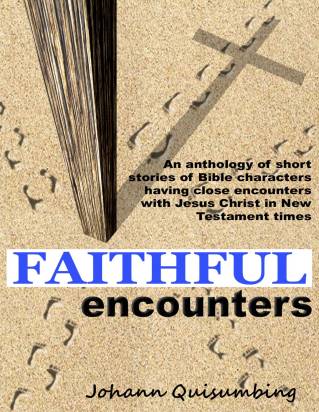 “Joanna, did you not understand what I said? The king is seeking him. If they find him, they will arrest anyone who is with him. And if they take you, the king will wonder how is it that the wife of his household’s chamberlain is among a man he has been trying to track down since he had served the head of John the Baptist on a silver platter to the Lady Salome?”

“Yes, yes! I know that. The whole court knows that, but none of us don’t want to end up nailed to a cross, so we bow down to him.”

“Oh, why did you take the post as his chamberlain? We could have been back home in Gath-hepher.”

“Because I did not want to spend the rest of my days pressing cheap wine. I wanted something better for us! Besides, it was your own father that arranged it with the king’s head steward. The king is so rich and he reward those of his household.”

“Yes. And at times, he is like his father, the old king.”

“No, he is just half like him… like that mad king. I was just a lad when the old king ordered the senseless slaughter of all those infants in the Bethlehem District. That was about thirty years ago. I really thought Antipas was not like his father until what happened to the Baptist. But then, he does fear some kind of divine reprisal. After the slaughter of those children, the old Herod suddenly died a very painful death. Antipas is rightly convinced that it was divine retribution. Yet, I think he does not fear the Lord enough. I just don’t know anymore. I’m afraid for you, Joanna.”

“Joanna, what is it about this carpenter’s son that makes you traipse around the district following him?”

“I have seen such wonders, Chuza. For months, I have followed him visiting one village after another throughout the countryside. Wherever he went, the lame walks, the blind sees, the lepers are cleansed and the possessed are freed. Even my own cousin from Magdala, Mary, was set freed of seven demons that tormented her. But it is not just the miracles. It’s his teachings!. He gave a lesson that he taught a number of times about a wedding feast and ten virgins.

“He started with ‘the Kingdom of Heaven will be like ten bridesmaids who took their lamps and went to meet the bridegroom. Five of them were foolish, and five were wise.’ The five who were foolish did not take enough olive oil for their lamps, but the other five were wise enough to take along extra oil. When the bridegroom was delayed, they all became drowsy and fell asleep. At midnight they were roused by the shout that the bridegroom is coming. The bridesmaids got up and prepared their lamps. But the five foolish ones’ oil had ran out . They asked the others to share some of their extra oil. The wise ones refused because there were not enough oil for them. So, the foolish ones went off to buy all. Unfortunately for them, while they were off buying oil, the bridegroom came. Then those who were ready went in with him to the marriage feast, and the door was locked. Later, when the other five bridesmaids returned, they stood outside, calling, ‘Lord! Lord! Open the door for us!’ But he called back said, ‘Believe me, I do not know you!’

I hope you are enjoying the 32nd segment of my ebook, FAITHFUL ENCOUNTERS.