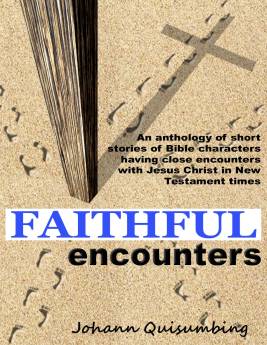 The next day, Andrew took the boat by himself and sailed to Capernaum. When he landed at the city, he went to the house of his brother, Simon.

“Andrew! At last,” said Simon. “I thought you and John were going to stay down south following that desert fanatic all through winter time. I’m glad you are back.” Simon was a large bulk of a man with brawn sholders and thick neck. He stood about four inches taller than Andrew. His head of hair and thick beard were curly and was somewhat redish brown. He was sometimes mistaken for a foreigner.

Simon hastily came out of the house, picked up a large bundle of nets and rested them on his shoulders and started to head for the shoreline.

“It is a good thing you came along today,” said Simon. “If I had to stay with the in-laws a day longer, I think I’d tear my beard off.”

Meanwhile, while trying to keep up with his brother, he was trying to say something to him. “Simon… Ah Simon… I need to tell you… something… important.”

“Later! Let us get into the boat first,” Simon ordered.

When they reached the boat, Simon easily unburdened himself of the bundled nets which was quite heavy then jumped in. Andrew untied the anchor line, took hold of the bow of the boat and pushed it out on the water while Simon was in the process of erecting the mast. As soon as Andrew was waist deep, he climbed in and took up the oars. He didn’t have to row too far, for Simon had the sail up.

A mile out on the lake, Andrew tried again to talk to him.

“We have found the Messiah!”

Simon was staring at him for awhile, then he broke out into hilarious laughter.

“Simon, listen!” Andrew said a little intensely. “We really have found the Messiah! He awaits to meet you at our father’s house.”

Simon was still laughing as they sailed back to their hometown of Bethsaida.

I hope you are enjoying the 15th segment of my ebook, FAITHFUL ENCOUNTERS.
Feel free to leave your comments below. I look forward to read your comments and constructive inputs that will help me direct my creative thoughts.

Johann Q.
Please help me go mobile, donate at or share this link to others: https://www.gofundme.com/quadriplegic-needs-mobility