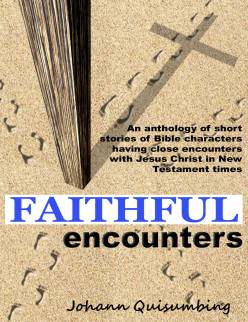 DEMACLI, THE LEGION DEMONIAC
24 A.D. in the region of the Decapolis

A year had passed. Demacli was riding on a carriage carried by six slaves down a wide boulevard being hailed by people of different classes. When they got back to the villa, Habbi was there waiting for him.

“I take it, Master, your meeting with the Roman was fruitful.”

“It wasn’t but then it was. The Roman was no help but the Egyptian I talked to will aid us to double our profits for the next year or so.”

“That is good, Master. Your father would be proud.”

“As a matter of fact, I just recieved a message from your father. Your entire family will be here in three days.”

“Three days, you say.” Inside Demacli was concerned.

“What is wrong, Master? Why the frown?”

“Ah…” He shook his head. “Nothing that concerns you, Habbi. I am going up and I am not to be disturbed.”
He went up straight to his room.

“Why is my father coming? Why now?” Demacli asked himself.

“He is coming because he wants to take away from your success!” It was his voice he heard but harsher. “He is jealous of you!” His voice again but more weaselly. Other voices in his head began to intrude by suggestting other things about his father.

“Enough! You’re all too much again,” he said clutching his head. “Speak to me one at a time.”

Echoing deep inside his mind, he thought he heard many laughters as if from a jest fading away. One voice came out but more authoritative.

“So, your father is arriving. What will you do?”

“What is there for me to do?” Demacli whined.

“Stop your whining. You be the man! Face up to your father, if need be.”

Then, the other voices returned.

“Greetings, my son,” said a portly man, as he slowly alighted out of a horse driven carriage. Following him was his mother who was slightly taller.

“Hail to you, father and mother,” Demacli said as he first embrace his mother then grasped the forearm of his father, Roman style. Looking around, he asked, “Where are my sisters?”

“Oh, we left them in Hippus,” his mother said.

“Ah yes, Hippus. I miss our home. I miss the hills that overlook the Sea of Galilee. Come. You must be hungry.” He led them to the covered patio where lunch was being laidout for them.

After an hour, the table was being cleared by the servants. They were lounging around on big plush cushions under a canopy of vines and fragrant flora. What fronted them was a garden of palm trees and circular pond with a statuate of Dionysus holding up a stalk of grapes.

“You have done well for yourself, my son,” his father said looking around. “We are pleased at your accom…”

The voices in Demacli’s mind intruded again with many suggestions that his father was less than sincere and also that his mother seem secretive. He had to struggle to keep his mind focused.

“Ah, ummm… yes… I mean, I am sorry, father… mother. I am a little distracted, today.” He stood up quickly and agitated. Not waiting for them to ask anything, he said, “You must be tired. Habbi will lead you to your room. I… I must go!” Then, he dashed out the doors of his villa and was walking fast down the street. The whole time, hundred of voices were laughing and jabbering away mostly about why his father was here. It was so distracting that Demacli didn’t realize that he was already a mile outside the city, running up a hill .

When he got to the top, he collapsed to his knees and screamed in anguish, startling a nearby flock of goats.

I hope you are enjoying the 9th segment of my 2nd ebook, FAITHFUL ENCOUNTERS.