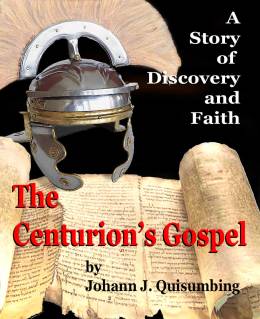 “Tyre ahead”, a shout came from above.

Cornelius scanned the distant horizon. The city was still some distance away and he could not distinguished any visible structures yet. But there were signs of commerce coming and going. The sea lanes were busy with boats of all types and from different countries. He recognized Phoenician merchant ships with their colorful sails. Their deep water brigs have been known to navigate the whole of the Mediterranean and Black Seas. Some have even ventured to the cold shores of Britannia. He watched a pair of Egyptian boats going north probably plying their wares to the coastal cities of Asia Minor. A small Greek coaster following the Egyptians sped away to avoid getting closer to the Roman fleet. He surmised that it was one of those Aegean pirates that frequently preyed on unsuspecting merchantmen. A fishing fleet of Arabian Dhows of different sizes were racing home bringing their catch for market.

Then Cornelius heard running bare feet coming behind him. He didn’t need to turn around to see who it was. It was Trax. A boy in his early teens came to the railings next to him in excitement. He was pointing, clapping and waving to passing boats. In his excitement, he made no vocal sounds at all. He was a mute. He could hear and he does have a tongue, but he can only make clicking and mouth sounds. No words come out. Most of society would label Trax as a simpleton. However, Cornelius sees a lot more in this boy. So much so, that he developed a close affection for the lad that he made him part of his household. But from society’s point of view, Trax is still a slave. That was what he was when Cornelius purchased him.

Some years back, in a battle skirmish, Cornelius found himself fighting a very burly Trajan mercenary who was so intent on cleaving his head in half with his battle ax. He would have succeeded if it were not for a sprightly young slave boy – a muleskinner – who tackled the mercenary from behind. And when the mercenary turned to strike, instead of running away, the boy faced him crouched in a fighting stance with only a skinner’s knife in his hand. The mercenary was so enraged and distracted that he did not see Cornelius throw a deadly javelin that killed him. Cornelius had no idea why the boy, Trax, who was so named by his master – the head mule driver – risked his life to save him. Trax’s master wanted to beat him for abandoning the mule train which had scattered. But Cornelius intervened and gave the mule driver a bag of silver without counting it and Trax belonged to him. Cornelius kept him as a personal servant but he wore no slave collar.

“There you are, boy!” Jacob came puffing and huffing, “no sooner than I turn around to pack our things, you disappeared on me.”

Trax starts pointing towards the city and starts clapping his hands.

“Ah… The ancient city of the Sidonians, Tyre.” Looking slyly at Cornelius, he asks, “In the book of Kings, what Queen came from that city and brought havoc to the northern kingdom of Israel?”

“I knew you were going to asked that,” He responded with a knowing smile. “It was Jezebel, daughter of Ethbaal king of the Sidonians. King Ahab married her during the time of the Prophet Elijah and brought her to the city of Jezreel when the kingdom Israel was already divided into two nations. It was she who brought the worship of Baal into the North Kingdom. This eventually lead to the one God allowing the kingdom to be conquered by the Assyrians and exiled.”

“Excellent!” Jacob said proudly “You are truly my prized student. Your brother and sisters may have enjoyed the stories of my people but it was only you that was inquisitive… always asking questions. Good questions. I remembered when I approached your father for permission to teach you the Scriptures. I was hesitant and feeling some trepidation that your father might upright and sell me.”

“I remembered. Father came to me that night and asked me if I wanted to taught by you. I said yes. Then he just looked at me for a longtime without a word spoken. Then he nodded his head and whispered into my ear saying, ‘Don’t let the old goat turn you into a Jew!’

Jacob started to chuckle. “Your father is a brave and wise man and he loved you enough to allow you to explore new things. Did I not tell you one time that you were the reason why I became a bond servant to your father for life? When your father as magistrate saved me from the debtor’s prison, I was to work off my debts to your father for seven years and then I would be free.” Jacob’s eyes was tearing as he placed his hand on Cornelius shoulder. “But then your education was progressing wonderfully. I had no sons of my own… Well, I went to your father and by the traditions of my people I chose bond servant hood. Now, I am your bond servant since your father signed me over to you.”

“Look, Jacob,” Cornelius gestured to the land. “Your homeland at last.”

“Aye,” sighed Jacob “It’s been about 30 years since I left my family for Greece. Herod was still king of all Judea, Perea, Galilee and Samaria. It was what he did that I chose to leave Judea.”

“For all the years that I have known you, you have yet to tell me why you left.” Cornelius saw that Jacob was staring out with a blank stare. “Jacob!”

“Ah!? … Ahem… Oh yes… Well, I shall tell you one day… I promise. Come Trax,” Jacob turned to walk back below. “We must prepare to disembark.”