Imagine this scenario – You were going through a park and meeting a man who recently suffered a stroke. He was being pushed around on a wheelchair by a hired caregiver. In that first meeting, his demeanor was light and friendly. Some months later, you ran into the same man. He was sitting by himself in his wheelchair under a tree. His caregiver was talking to someone else about 40 feet away. At first, you thought he was a different person, but then you recognized him as the same guy. Unfortunately, his appearance was of someone whose demeanor was totally opposite from when you first met him. He was slouching to one side with his head drooping. His face was sullen, skin blotchy, drawn in close to the bone and deep bags under the eyes. Then, there are the eyes that can only be described as sad… unhappy… bereaved of joy. 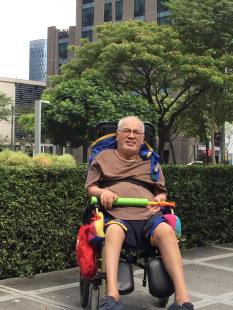 At first, I could not understand how frustrating it can be to be totally dependent on someone to push me around in a wheelchair. Until I found myself in similar situation. Now, I am usually a good-natured guy but lately whenever my caregiver take me out, I always end up being a tiny tyrant of a ‘backseat-driver’. I’m constantly telling my caregiver to go here, to angle there, to suddenly stop and back up because I just spotted something. One thing I hate the most, is whenever something neat is happening I am facing the wrong way and the caregiver is always late to respond. It has gotten to a point where I enjoy staying in bed more where at least I have some control of my computer. (Of course, that is for another story.) In the long run, I really hate being ‘pushed around’, so to speak. Who does?

Depression and self-pity are things quadriplegics have to face and battle with everyday. But by God’s grace, technology has come a long way to provide us ways to improve the quality of life. In Youtube, I have viewed other quadries like myself living happilly and with renewed vigor on their hi-tech wheelchairs. I have a choice. I either wallow in self-pity and eventually succomb to depression. Or I use my God-given gift and do my very best to improve my current state of things. The draw-back is the very high prices of the equipment needed.

My challenge is to raise the funding so that I too can become useful and productive not just for myself but for others. So, I again plea for help to raise the money so that I can be independently mobile. Thank you.