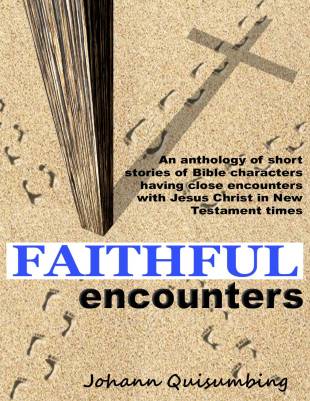 For the past five years, Demacli had lived a nightmarish existence. For a time, he was blissfully unaware of those periods when his body was taken over by some entity and did things that were unspeakable. Lately though, the demon or demons in him, have kept him aware but helpless to act when his body is taken over and over. His father who was overwrought with worry have searched the land high and low for a cure. He even went to the Jews as Elpida the prophetess had advised. But a priest of their temple had said that his son must become a proselyte, a covert into their religion. Then, there might be the possibility of healing, though the priest did not sound convincing. So, they gave up and returned to Hippus, their home city by the Sea of Galilee, where they had to contend with Demacli’s erratic behavior.

“Aaaargh!” Demacli snarled at the bright light of the torch.

“Look… it is the maniac again!” It was the voice of a city watchman who patrolled the streets after dark.

“He is naked again,” said another guard.

“He must be the one that assaulted that merchant a block away. Go get the chain.”

Demacli can see them clearly. There were three of them. After a couple of minutes, a fourth came up carrying a long chain. Demacli looked at his surroundings. He was in an alley and they blocked his way. To the city watch, he looked like a scared dog looking left and right. But from his perspective, he was pretending to be scared. He wanted to talk to them but he was not in control. One of the watchmen grabbed his arms to pin him down. Demacli started to yelp and whine like a panicked animal. The other men fastened iron cufflings on his wrists. Then they dragged him out of the alley unto the street.

“Let’s bring him to the square and chain him to the post. His father can claim him in the morning.”

When they dragged him to a waiting cart, his body went limp like he fainted. But Demacli was very much aware and knew what was going to happen. It took two men to pick him up and was about to cast him in the cart when he suddenly grasped the ankle of one of the watchmen and flipped him. His legs wrapped around the other man’s neck and toppled him over as well. He quickly got on his feet and with super human strength, he grasped the chain and broke it. The other watchman was stunned and slowly backed away. Demacli started to run with dangling chains, laughing out maniacally. The rest, he did not remember.

Demacli heard birds chirping. He peeked his eyes open to find a bright blue sky. When he sat up, he was in the midst of several burial cairns, one of which was freshly dug up. He cringed at the thought that he was hiding in it. He heard sea gulls in the distance and looked out at the lake. Two fishing boats can be seen heading to this shoreline. He turned to his right attracted by the sounds of snorting and squealing. A large sow and some piglets were nuzzling and feeding around the stone mounds of the dead. He stood and saw a larger herd of pigs higher up on the nearby hill being watched by a couple of swineherds.

He hungrily eyed a piglet that was nearby. Voices in his head were teasing him to catch it and tear into its flesh. Then, he saw that both boats had already made landfall and the people of the boats were setting up camp. Demacli suddenly felt both anger and fear deep down. For a brief instance, he almost had control of his faculties but then, he could not help but stare intensely at the people on the beach. His vision darkened, like the sun went behind a dense cloud cover, but the sky was clear. There was something odd with his perception of the people at the beach. Most of them were quite dim but one. That one person was glowing brighter than the others.

I hope you are enjoying the 30th segment of my ebook, FAITHFUL ENCOUNTERS.