THE COVENANT OF BLOOD

Once a month, usually on the first Sunday, most churches celebrate by partaking in the Lord’s Supper (Communion). This is when little pieces of bread and tiny cups of grape juice or as some churches prefer, red wine are distributed among the congregation to commemorate the sacrifice of Jesus Christ on the cross. Technically speaking, this practice of eating the bread and drinking the wine is a ritual. Now, I am not usually fond on doing rituals and many traditions, however this ritual is one that I just love to practice. Do you know why? Because it was Jesus who institutionalized it for us until He finally comes and claims us .

While they were eating, Jesus took bread, and when he had given thanks, he broke it and gave it to his disciples, saying, “Take and eat; this is my body.”

Then he took a cup, and when he had given thanks, he gave it to them, saying, “Drink from it, all of you. This is my blood of the covenant, which is poured out for many for the forgiveness of sins. [Matthew 26:26-28]

I have been privileged to go to four churches; 2 churches here in Manila and a couple in Washington State and in California. And in all of them, I had heard many wonderful sermons on the first part of the Lord’s Supper about how the bread represents the body of Christ and what He endured on the cross. But because the preachers were allotted with a limited amount of time during the services, I have yet to hear about the second part. What does Jesus want us to learn about the blood of the covenant? First things first…

What does the Bible say about blood?

I need not have to explain why the life of all creature is in the blood.

I learned this quite young when my grandfather who was a farmer had me watched for the first time the slaughtering of a pig. I am afraid I may have to be a little bit graphic here. In those old days, the animal was still very much alive when the farmer plunged his knife into the creature’s neck severing the jugular vein. Its lifeblood gushed out in a constant crimson stream slowly and surely denying the brain of oxygen. It was not long until what was once a living creature, had then become a lifeless carcass. I was 7 years old then.

So, since blood is synonymous to life, God commanded this…

But be sure you do not eat the blood, because the blood is the life, and you must not eat the life with the meat. [Deuteronomy 12:23]

One reason God prohibited the consumption of animal blood in the Old Testament was to teach respect for the sacredness of life. Blood is viewed as a symbol of life throughout the Bible, so much so that after mankind sinned, God had set a precedence for their redemption.

In fact, the law requires that nearly everything be cleansed with blood, and without the shedding of blood there is no forgiveness. [Hebrews 9:22]

By definition, redemption means the action of regaining or gaining possession of something in exchange for payment, or clearing a debt… and innocent blood was the price.

God illustrated this to Adam and Eve in the Garden of Eden.

In Genesis 3, Adam and Eve had just sinned by eating the fruit that was forbidden. They then covered themselves with fig leaves in an attempt to hide their shame. Deep down they probably thought they were successful in hiding their guilt. Of course, God is never fooled. 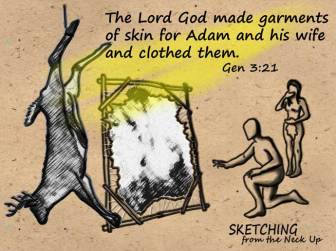 He saw through their futile attempt to make themselves look presentable that He disapproved. Verse 21 simply stated that the LORD God made garments of skin for Adam and his wife and clothed them.

Did God just simply cause the garments of skin to appear from out of nowhere? He could, quite easily, in fact, but what was evident in Scriptures suggested that God had a large animal slaughtered before their eyes. They witnessed the blood of an innocent creature being spilled so that their sins will be covered. Instead of being totally cut off from His grace, God had provided the people of the Old Testament a way to approach Him without being destroyed by Him.

Adam passed this practice down to Abel, Seth, Noah, Abraham, Isaac, Jacob and yes even to Job. But it was in the time of Moses, in the book of Exodus, that God provided us with a clear picture of how innocent blood redeems.

It was at the time when Moses confronted the king of Egypt with the commandment of God to ‘let His people go’. Nine plagues God had already released upon Egypt and yet Pharaoh refused to obey. So, God intended to send the tenth and final plague… the worst of plagues… the deaths of the first born in Egypt. This would have included the first born of Israel if God had not provided a way for them to escape. How? Every family would have to kill a lamb and place its blood on the door frames so that God’s angel of death will pass over that house and spare their first born. Which he did.   [Exodus 11]

After the fateful event, God had commanded that an intricate system of animal sacrifices  be established as way for the people of Israel to gain forgiveness and then worship. A system that was repeated year after year. Why year after year? The system was meant to be temporary and besides which…

It is impossible for the blood of bulls and goats to take away sins. [Hebrews 10:4]

Here still lies the problem for mankind – SIN. If the shed blood of innocent animals could not truly redeem us from eternal damnation of hell, then what could?

By every right, it was one man that brought SIN in, so, it should be a man to pay the price.

The problem is that no man born in this world (i.e. born of man and woman) can qualify to God’s precedence for redemption. So, who can save us?

The Old Testament Temple practices were never meant to solve mankind’s ultimate dilemma. It was a dress rehearsal, so to speak, for the biggest show!

The show when God enters our reality as man… Jesus Christ…

Who, being in very nature a God, did not consider equality with God something to be used to his own advantage; rather, he made himself nothing by taking the very nature of a servant, being made in human likeness.

And being found in appearance as a man, he humbled himself by becoming obedient to death — even death on a cross! [Philippians 2:6-8]

So, when you partake in drinking the cup, keep mind of what Jesus preciously shed and remember the covenant which is when God who is Holy looks at you, He will choose not see your old sinful self but the blood of Christ than covers you.

If you are not sure if the blood of Christ is covering you, then set your mind to learn and get to know Jesus Christ. Then believe.

Well, where ever you are right now, know that God is listening for you. Talk to Him with no delay and express your faith in Jesus Christ and receive Him into your heart as your Lord and Savior. You only have to pray the prayer below once, but with sincerity, because when He enters your life, He will never leave you.

PRAYER: Lord Jesus, thank you so much for loving me. I confess that I am a sinner worthy of eternal punishment. Thank you for dying on the cross to pay for all of my sins. With your help, I am turning away from all my sins. Today, I put my trust in you as my Lord and Savior and I receive you into my heart. Thank you for forgiving my sins and for coming into my heart. I accept your free gift of eternal life. Thank you that one day, I will go home to be with you in heaven. From this day on, I will follow and obey you. Amen.*

* Note: It is not the prayer that saves us but faith in Christ. The prayer is a way express belief.