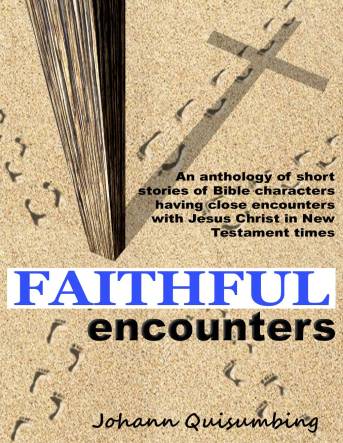 Nahan had been visiting a rich friend who had set up an encampment on the north side of the Kidron Valley just at the foot of the Mount of Olives. The campsite was situated higher on the slope overlooking the entire valley which was packed with multicolored tents, hazy from thousands of cook fires. Even the Kidron river which flowed down the center of the valley was hardly distinguishable. The valley was a sloped shallow crevasse between the Mount of Olives in the east, the towering Temple Mount and the City of David in the west.

He had spent a profitable night with his friend, whom he only gets to see once or twice a year. Besides being a priest, Nahan is also a vineyard owner of which his friend is managing for him. As he was making his way back to the Temple, he was quite happy that his business was doing quite well. Then, he noticed that there was a crescendo in the general ambiance sound of thousands of people in the valley below. He paused in his stride just upon entering the eastern lower gate at the base of the mount. Curious, he took one step back to see what was in the air.

The people below the ledge where he stood were also aware that there was something happening but were confused of what. But then others coming from the midst of the city of tents started to point to the east. From where he stood, Nahan looked east and saw where the road from Jericho wound over the south-lower ridge of the Mount of Olives. The road itself could not be seen because of all the people there. Then he saw the waving of the palms and he knew who was coming. He smiled.

Nahan checked himself to see if he was wearing anything that might reveal he was a priest. He then took the short flight of steps down unto the bridge that span over the ravine. He worked his way through the crowd to the end of the bridge where the Jericho road ends. Temple guards posted there recognized him. He told them to pretend that they do not see him. But he took advantage of the two-level platform that they usually use. From there, he could clearly see throngs of palm-waving people lining the road. Then the cheers got louder and he saw him riding on a led donkey followed by a colt that skittishly hugged it’s mother. It almost looked like the Nazarene was astride on both animal.

Nahan almost laughed out loud in amusement. He knew that Jesus of Nazareth have not made any claim of kingship but there he is riding into the city from the east like the kings of old. He knew this was clearly a statement. He turned around and craned his head up to look up the sheer cliff and walls of the Temple Mount. He peered against the glare of the sky at the battlements and saw no one yet looking down.

If you want to support my writing, there are two options: