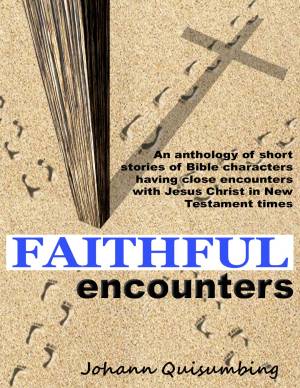 Mary had managed to escape again from Martha. Martha had given her much to do again. She was preparing the house for, what Mary considered another frivolous party for another unknown visitor who had sent word the day before of their arrival. Martha loves to play hostess to many of their father’s business acquaintances and even to quite a few of her suitors. Traditionally, husbands were already chosen by the parents even when their daughters were young. But since Mary’s mother had passed away when she was very young, her father, Simon, had forwent tradition and told that they are free to choose a partner for themselves. Martha is closed to eighteen but no man had interest her yet. Mary suspects that her father may have to secure her a husband soon if he ever want to see grandchildren. Lazarus who is about twenty would be expected to wed when he reach his thirties. As for herself, her father had not spoken to her about love or marriage at all. She thinks that her father is trying to keep her as his little girl for as long it took. But Mary had her own ideas about romance and escaping from Martha gave her opportunity to daydream more about it under her favorite tree.

She went to her tree about two hours after the noon meal living out her romantic fantasy until sleep took her into slumber land. In her dreams, she was looking up to the man of her dreams except that she could not make out his face which was in dark deep shadows because the sun was at his back. Then he extended his hand down to help her up when she noticed that his wrist had a cruel scar on it. Then an echoey voice was calling her name repeatedly.

Suddenly, her eyes snapped open and there before her was a hand just like her dream except there was no scar.

“Mary, wake up!” It was the laughing voice of her brother. When her eyes focused, she realized that it was nearly dusk. She saw her grinning brother and a group of men looking up from the road. She looked at the hand that awaited to help her up. She followed the arm up to a smiling face of someone she did not recognize. He had a short beard and his hair came down to his shoulders. But it was his eyes that fascinated her. It’s like they can see deep into her very soul. As he helped her to her feet, she felt herself blush.

When they joined her brother and the others on the road, Lazarus introduced her to the man.

“Mary, this is Jesus. He was the one that healed father.”

Mary did not hesitate to gleefully throw her arms around Jesus’ neck which caused the disciples to laugh in approval.
The next day, Jesus was teaching in an enclosed garden. The Twelve disciples were there with Simon and his son, Lazarus. Mary was sitting at Jesus’ feet. One or two of the disciples probably noticed that as she attentively looked up at Jesus she was obviously glassy eyed. Even Lazarus was amused with the wideness of her eyes. But as to Mary, she was joyously oblivious to her surrounding. All she saw and heard was only him.

“If anyone wishes to follow me as my disciple,” Jesus teaches. “He must deny himself. That is, set aside selfish interests, and take up your cross.”

“Master?” asked Simon Peter. “What did you mean ‘take up our cross’?”

“A time will soon come when all these things will become clear. For now, you must learn to develop the willingness to endure whatever may come and follow me. This mean believing in me, conforming to my example in living and, if need be, suffering or perhaps dying because of faith in me.

“For whoever wishes to save his life in this world will eventually lose it through death, but whoever loses his life for my sake will find life with me for all eternity. Consider this, for what will it profit a man if he gains the whole world… wealth, fame, success, but forfeits his soul? Or what will a man give in exchange for his soul?

“For the Son of Man is going to come in the glory and majesty of His Father with His angels, and then He will repay each one in accordance with what he has done. And I assure you and most solemnly say to you, there are some of those standing here who will not taste death before they see the Son of Man coming in His kingdom.” [Matthew 16:24-28 Amplified Bible]

I hope you are enjoying the 44th segment of my ebook, FAITHFUL ENCOUNTERS.

PS… If you want to support my writing, there are two options: