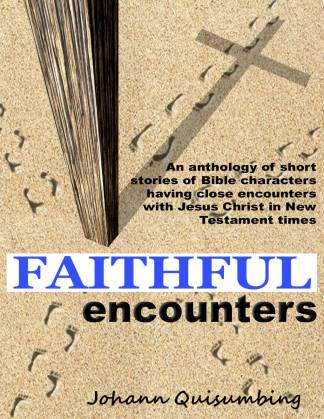 Demacli abruptly shouted a language that was unrecognizable to him. He started to dash down the slope, insanely screaming, towards the glowing person. As he came closer, the glowing one and the others turned toward him when they heard his maniacal tirade. Some of them were about to protect the glowing one, but he held them off. He took two steps forward and in a commanding voice, Demacli was commanded to stop. It was so commanding that he stopped like he was thunderstruck and fell to ground. The voices in his head were screaming in excruciating pain so much so, he was screaming out loud.

Then, the glowing one approached even closer. He spoke again in a language that he didnot know. It was the language of the Jews but yet older. Though he didnot know what he said, the effect on the voices sounded like they were being tortured.

Then he spoke but it was not his voice. “Why are you interfering with me, Jesus, Son of the Most High God? Please, I beg you, don’t torture me!” [Luke 8:28]

Then, Demacli’s vision clears. The man standing before him was no longer glowing. He was of average height. He had the dark hair that was about shoulder length and short beard and mustache. His appearance was plain and ordinary. To Demacli, he would not look twice at him, but yet the voice was clearly afraid of him and he called him the Son of the Most High God. Then, there was his eyes, which were deeply penetrating. He looked at Demacli for some time.

“What is your name?” he commanded with such authority and in Greek.

Then all the voices in him spoke out in a desperate shriek, “Legion!” The sound was so ominous that the man’s companions stepped back.

But the man, Jesus, stood his ground and said, “Legion, I command you to come out of this man!”

Demacli inadvertently doubled over in intense pain and screamed, “It hurts!” But this time it was in his own voice. Then again, the voices took over and pleaded, “Lord! We beseeched Thee! Do not cast us into the bottomless pit.”

Demacli painfully got up on his haunches and gestured to the distant herd of pigs feeding on the hill. He cried out, “Let us, instead, enter into those pigs on the hill.”

Demacli convulsed one more time, then it stopped. For the first time in six years, there was peaceful silence in his head. It was so quiet, it was deafening. He stood up blinking in surprise. Then everybody’s attention were riveted to a commotion on the nearby hill. When he turned to look, he saw the swineherds chasing the large herd of pigs racing uncontrollably into the lake. They all watched in fascination as everyone of the pigs went into the lake and under water. Soon, there are hundreds of floating carcasses being washed ashore.

“I… ah… I am free,” Demacli said almost not believing. “You have healed me. Are you a God?”

The man Jesus smiled and said, “Come, let us get you all cleaned up.”

Demacli was helped to the water where some of Jesus’ companions washed the grime away. After which they clothe and fed him.

When Jesus approached him, Demacli bowed to the ground. Jesus reached down and helped him to get up. Then, they started to walk along the shore and talk. Demacli filled with emotion was telling him all that he experienced. The more he told his story, the more his heart lightened and felt more free. By that time they both returned to the camp there was a gathering of people that came from the city. Apparently, the men who were herding the drowned pigs panicked, fled to the city and reported the strange event to the city magistrate. They made such a ruckus that a lot more people came along with the city guard to see what was happening.

When the magistrate saw Demacli walking calmly with Jesus, he asked in amazement, “Is that you, Demacli? You look calm and sane! What has happened here?”

Demacli told him how Jesus commanded the demons in him to come out and they went into the pigs that drowned. The town people started to mubble among themselves and referred to Jesus as being some kind of sorcerer. They started to back away in fear.

Seeing his people backing away, the magistrate said, “Nothing like this has ever been seen or heard of. I know not how this really happened, but you have powers that we do not want around here! We beg you, sorcerer, take your magic elsewhere and leave us in peace.”

The magistrate and the people backed away and fled back to the city. Only a few stayed and watched from a distance. Jesus looked at his companion and nodded. They proceeded to break camp and load up the boats.

“Lord, may I come with you?” Asked Demacli. “I have so much to ask and to learn. The voices that were in me said you are the ‘Son of the Most High God’. For years, as a Greek I always believed in the many gods of our beliefs. Now, standing here before you, I have serious doubts. Please Lord.”

“No, Demacli, go back to your family,” Jesus said smiling. “And tell them everything God has done for you.”

Jesus then led him away from the disciples as they continued to load the boats. He quietly said, “I will come this way again and I shall speak of my Father on High. Look for me in a years time.”

Demacli watched Jesus climb into the boat and sail away. He climbed up the hill and watched for a long while as both boats faded in the distance. He sighed deeply. Then, he walked back to the city of Hippus; back to his father’s house and told a most fascinating story.
———————————————–

I hope you are enjoying the 31th segment of my ebook, FAITHFUL ENCOUNTERS.