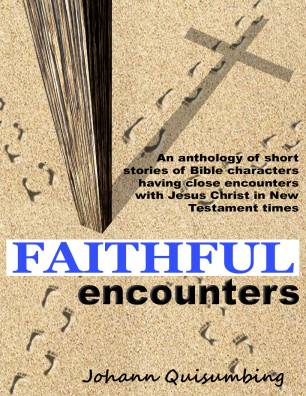 Then, the pounding stopped and he heard like a long roaring sound. When he opened his eyes, the first thing he saw were beefy legs. He looked up in wonder to find what he thought was a giant of a man swinging his staff in a wide circle driving the angry attackers back. Then, the angry voices quieted down.

He slowly and painfully stood up amazed as he watched the Nazarene calmly walking over to the giant and placed his hand on his arm. He looked up at him half-scoldingly and said, “Peter…” He didn’t have to finish the sentence. The big man returned a half grin and a shrug. He smiled shaking his head and then turned his attention to Simon.

Simon took two steps forward and then like he realized who he was facing threw himself on the ground and asked, “Lord, if you are willing, you can make me clean.”

“I am willing; be cleansed.”

Then the Nazarene started to reach down and was actually going to touch him. The crowd simultaneously gasped and Simon flinched back. But the Nazarene was quicker. Before Simon could back away, his right hand was on his back, his left was gently grasping his arm and helping him up.

Simon felt a warm sensation through out his body. Then the first thing he noticed was that he had feelings in his feet. He actually could feel the grass under his toes. Even his fingertips were tingling. He looked at his arms to find normal skin color rather than the expected sickly white flakes and bleeding sores.

“Look at his face!” exclaimed an awed voice from the crowd.

Simon hesitated for just a moment, then lifted trembling hands to his face. What his probing fingers revealed was a whole nose restored and no sign of sores.

Then, the valley was filled with celebratory singing and dancing. Lazarus, who had witnessed everything from among the crowd, went directly to his father and embrace him. They both wept.

Simon, still hugging his son, followed the rabbi to a nomad tent under the trees.

“Please, sit down,” the rabbi gestured to a matt on the ground. He went over to a low table and poured water into three clay bowls. He served the two bowls first to them, took the third bowl and joined them on the matt. “Drink first, then we talk.”

A woman brought in a large plate of flat breads, fruits, some meats and placed it in the middle of them. After they ate, the rabbi called for the men that were just outside the tent. Twelve men entered including the big man called Peter.

“Andrew, please take a couple of men and follow this young man to their camp and bring everything back here.”

When they left, the rabbi gestured for the big man and two others to sit down with them while the others sat in other parts of the tent.

“Lord, what is your name? I only know of you as the Nazarene.”

In the morning, Simon came out of his tent feeling invigorated. They were planning to pull up stakes and make the return trip to Bethany.

“Well, father, when we get home, we have to tell as many people that we found the Messiah… and show them how you were healed… and then…”

“What! What are you saying, father? People must be told.”

“I agree, but it will not come from me.”

“Because the master asked me,” Simon said solemnly. “His words to me last night were ‘Tell not anyone about this. Go, instead to the priest and let him examine you. Take along the offering as is according to the law passed down by Moses for those who have been healed of leprosy. It is most important that this will be a public testimony that you have been cleansed.’ ”

“We cannot even tell the girls?”

“Good. I cannot wait to see Mary’s face when you get home.”

I hope you are enjoying the 24th segment of my ebook, FAITHFUL ENCOUNTERS. We will take a pause on Simon the Leper’s story and visit him again some 20 years later. Our next story is about young Mary, daughter of Simon the Leper.