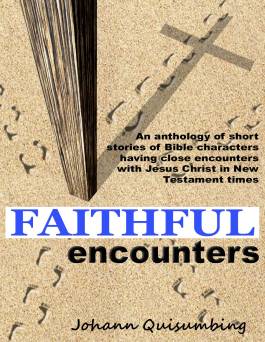 The hill was a little steeper, so Simon had to slow down his descent. Lazarus was following a short distance behind. He looks up and saw that the Nazarene was already in the valley approaching the creek, working his way through the crowd. He was approaching the edge of the crowd on his side of the valley. He paused to figure out where to go. Should he skirt the edge of the gathered mass of people? It looks like the only way to get to him was through all those people. Simon hesitated.

“Father, what is going on?” His son asked as he gasped for air.

Lazarus looked at him then he looked at the crowd.

“Father… No! Those people will kill you! You do not have to see you him today.”

Simon started to walk towards the crowd who were still about thirty feet away. Lazarus, not able to block or physically detain him, followed from behind.

When he was about ten feet from the crowd, Simon started to shout out to them. “Unclean! Unclean! Make way! Unclean!” At first, no one turned around, but then a young woman heard his shout. She turned around and screamed out loud. Apparently, Simon’s veil was uncovered and all the woman saw was a leperous face with no nose. Her scream came to the attention of other women and they too joined in the screaming. When people saw a leper walking purposely towards them, they scrambled out of his way. Simon managed to successfully penetrate through the crowd, so he thought he was going to make it. But then their initial surprise and panic quickly turned into anger.

Simon had to slow down because the angry shouting crowd was not moving aside as much. Then, they started to pelt him with stones. Some of the bolder ones started to come at him with long sticks. One of them hit him in the back of the head and Simon collapsed on his knees. Then they started to pound on him, hitting him on his back and his head.

Simon was dazed and his head was ringing. At one time, he thought his son was calling for him but his voice sounded so distant. Then, the pounding stopped and he heard like a long roaring sound. When he opened his eyes, the first thing he saw were beefy legs. He looked up in wonder to find what he thought was a giant of a man swinging his staff in a wide circle driving the angry attackers back. Then, the angry voices quieted down.

I hope you are enjoying the 23rd segment of my ebook, FAITHFUL ENCOUNTERS.