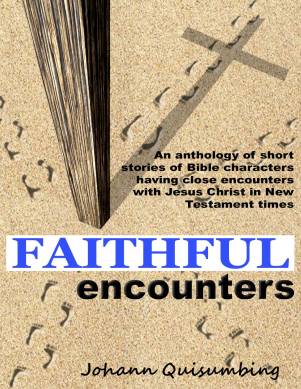 Three days later, two donkeys loaded with supplies and two goats tied to them were waiting outside the gate. When he came down from the roof, the halls and courtyard were empty of servants.

Then he faintly heard, “Bye Abba.” He looked up to see both Mary and Martha peaking out of the window. It wrenched his heart. When he went through the gate, Tahan and Lazarus were waiting for him.

“My son, if I do not return, you will be the man of this house. When Mary reach of age, it will be up to you to choose her husband. As to Martha, Tahan, do not pick someone too old.”

They both chuckled lightly. “Do not fret, Simon. I will be there every three months with supplies.”

“I hope you still remember how to get to the canyon. Well, I better be off.”

Simon untied the lead donkey and had to tug a little hard to get it going. As he led the animals away, he dared not look back. The few neighbors he saw hastily shut their doors and shutters as he passed their homes. He could not help but feel hurt for many of them were his friends. When he reached the village square, it was crowded with people. He covered his face. Then he pulled on the animals and headed for the main gate. There was one other thing he had to do whenever going through a crowd which he dreaded. It was a requirement from the priesthood.

In a loud voice, he called out, “Unclean! Make way. Unclean!” He had to repeat himself until he cleared the crowd.

Practically everyone in the square turned towards him in surprise and quickly made way. They were surprised because they didnot expect to find a leper in their village… in their very midst. Then the gossips began.

As Simon made a straight bee-line for the gate, mumbling voices trailed him. “You see… it is Simon!” “Simon the leper…” “Simon! But I thought he lived such a blessed life.” “What sin did he do?” “Some one as rich as him has to have done somethin’ wrong.” “I heard he cheated his partners.” “His poor children…” And it went on and on. Simon quickened his pace.

He breathed a sigh of relief as he went through the main gate unto the Jericho road. He paused to look right. That dusty road zig-zagged down the Judean Highlands to the city of Jericho and the Jordan River Valley. He would have trekked south along the west bank of the sunken salten sea for two days until he reached an area in the vast wilderness his father showed him decades before. Then he looked left where the road led to the big city. He decided to go left.

About two hours later, he was on the crest of the Mount of Olives with a spectacular panoramic view of Jerusalem. But most importantly, he had a clear vantage point of the Temple. The sun was still very high in the sky and it’s glare was reflecting off the gilded moldings on the crown of the tall majestic edifice which housed the most sacred place in the entire world, the Holy of Holies. Grayish smoke rose from within the temple complex. Simon could picture his usual place in the only area where Israelite males were allowed to congregate in the Temple complex, the Court of Israel. From his former place, he had a clear view of the large burning altar which sat to the right of the Temple’s golden double doors about thirty feet away. The altar rose about four feet off the ground. Twenty priests could stand around the platform around the large fire pit. During the annual festivals, a continious thick black smoke would fill the skies for a whole week from the tens of thousands of animal sacrifices offered. On the Passover, the most important of the festivals, the priests of the altar would pass a bowl of the collected blood to the High Priest. He would then carry it through those double doors to seek forgiveness for the entire nation.

Tears came to his eyes. As a practice, he used to give his offerings for his family once every week before the Sabbath. As he watched his offering being put on the fire, he would get down and bow low to the ground and worship. Because of leprosy, he had not worshipped in weeks. Because of his unclensed condition, the thought of not being again part of the most holy of festivals had wrenched his heart. Simon went down on his knees and gave a curdling cry of despair. After an hour of crying, he got up and headed south.

About three hours from the city, he came upon the path that he remembered led to the leper colony. He decided to swing by for a quick look see. When he was younger, he used to accompany his father a few times to bring food supplies to this colony. He would say that the rich should always show compassion to the needy. Simon had continued the tradition with his own son.

The leper colony was actually located in a wide ravine that had extended caves where the residences take refuge from the elements. Simon followed the track that went up a rocky knoll. When he reached the top, he saw the ravine below him. Smoke from several campfires rose from the ravine opening. As Simon came close to the edge of the ravine, he saw on the other side, men unloading food supplies off a cart. They are Levites from a nearby village vowed to serve the priesthood and the people. They loaded the food on a wide basket that was strung on wooden crane built on a rock ledge. When the first load was full, they then swung the crane over the edge and lowered it down about twenty feet to an eager group of shabbily dressed lepers that could still walk.

From what Simon could assess, the number of lepers have doubled since he was here last. Rickety make-shift tents lined the far wall. He could see a number of them going in and out of the cave entrance. Where once a stream fed a pool that was in the middle of the ravine, now a stinking greenish stagnant pool is left and the stream dried up. There were bodies lying around the pool, some moving, some not. Simon turned away feeling a sense of pity and helplessness. He continued north, traveling on rarely used paths mostly avoiding the villages on his route. Four arduous days later, he reached his destination in the Judean wilderness.

I hope you are enjoying the 5th segment of my 2nd ebook, FAITHFUL ENCOUNTERS.